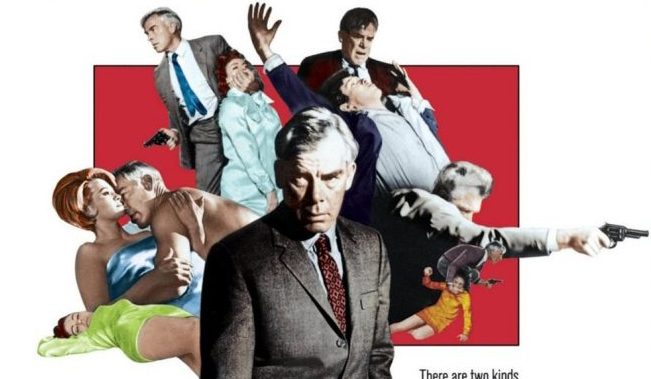 Made in 1967 Point Blank was Martin Boorman’s first major feature. His talent as a director showed a good deal of imagination in this film. Not exactly a prolific filmmaker, he went on to make Deliverance (1972), Excalibur (1981), The Emerald Forest (1985) and Hope and Glory (1986). He also made a couple of well known turkeys too, the strange sci-fi film starring Sean Connery, Zardoz (1974) and Exorcist II: The Heretic (1977).

The plot of Point Blank is straight forward and could have been written for a quickie film noir thriller from the 1940s or 50s. Where this film departs is in the dream-like style that Boorman infuses into the film. Lee Marvin plays Walker, a tough guy who’s been involved in a heist with his old partner in crime, Reese (John Vernon). They meet up in the abandoned former prison island fortress of Alcatraz with Walker’s wife, Lynne (Sharon Acker). Reese double crosses Walker, shoots him and leaves him for dead, departing with both Walker’s wife and the loot. Left for dead Walker recovers with the help of mob boss Yost (Keenan Wynn) and goes after Reese to get his money back. In a memorable dream-like scene we see Walker walking down a corridor with the persistant sound of his shoes clicking on the floor. Lynne sensing him coming wakes when Walker kicks in the front door, knocks Lynne unconscious and shoots several shots at point blank range into an empty bed, believing Reese is there. He’s not. The next morning Walker wakes to find that Lynne has taken an overdose. He is cold and ruthless by now and with the help of Lynne’s sister, Chris (Angie Dickinson) he continues to go after Reese and the money.

Point Blank was not a big success on its release. Marvin was very much involved in the style, creation and look of the film, in what was a collaborative effort between star and director. Never the less it has rightly since become a cult classic. The film moves along at a cracking pace over its 92 minutes. Arguably it can seem as a little episodic as Walker goes from one person to the next as he seeks to get the money he’s owed back and have his revenge. Meanwhile, Dickinson had recently starred with Marvin in another cult crime classic, The Killers (1964) and between them they do seem to make a good team. In this film though, Marvin is total tough guy. His distinctive gruff voice is very sparse and minimally used here as he only seems to say “where’s my money?” which, unlike in The Killers does not seem to contain any existential angst. But also like the aforementioned film, Point Blank is very violent in places that is given extra power by the sound design on the disc with the gun shots sounding ear splittingly loud. Some critics even noted the use of violence and coldness of Marvin’s character extending from the dehumanzing effect of the Second World War on him.

The locations of the film are also interesting. This was the first time that a film was shot on Alcatraz, left abandoned since its closure in 1963. On the disc there are a couple of extras, vintage documentaries showing the shooting on the former infamous prison fortress (now of course a popular tourist attraction). Elsewhere the finale is shot in nearby Fort Point, a location previously used in Hitchcock’s Vertigo (1958). Re-released in the Premium Collection series (this one is number 37 in the collection), Point Blank is released as double format discs and includes commentaries by Boorman and Steven Soderbergh and some lobby cards inside as well as the vintage featurettes.