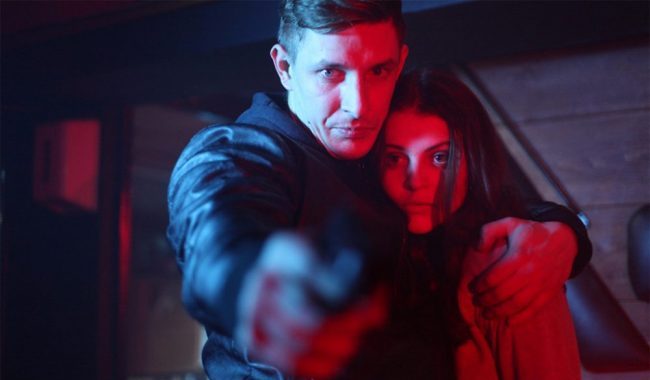 The Marker is a new British crime film that opens with a violent event.  Marley Dean Jacobs (Frederick Schmidt) raids a home where he finds the mother in the bedroom and goes to grab the woman’s daughter. The little girl’s mum goes to stab him as he’s dragging the little girl out from under the bed when he lashes out with the machete in his hand and cuts the woman’s throat. Marley is imprisoned for manslaughter as the judge recognises his remorse at what he had done. While in prison he is haunted by the ghost of the woman he killed, troubling him and haunting his everyday life. He tries to right the wrongs and reach out to the foster parents of the dead girl but his calls are rejected. When he is released from prison he makes his way to Birmingham. For the past 10 years he has been in prison he discovers that she has been sent from foster care home to foster care home and finds her being prostituted out. Marley becomes bent on redemption but things become more complicated when his old gang led by the dangerous Brendan (John Hannah) force him to finish the job.

Released by Kaleidoscope The Marker is a moody small scale thriller that is gripping in places and somewhat pedestrian elsewhere. The themes of the film are very dark, especially the sub-plot of teenage abduction and selling them off to the highest bidder as prostitutes, really showing a dark underbelly of society with some urban Birmingham settings some bleakness. It adds an extra layer of, dare I say it bleakness to the film. Writer/director Justin Edgar says on one the extras on the disc that he wanted to take much of the comedy element out of the way Birmingham is depicted and give it a noirish feel to it. The Marker is unlikely to set the world on fire but the action is well handled from a director that does not ordinarily make these kind of films.

The viewer can’t help but feel that there is a death drive to Fred Schmidt’s character with only the developing ‘relationship’ between Marley and the dead Ana becoming increasingly sillier, even those she is just a projection of Marley’s guilt. There is some interesting support here, including John Hannah, this time sporting an Irish accent instead of his distinctive Scottish one and Cathy Tyson. Remember her? She was the hooker that gets involved with Bob Hoskins in the cult Mona Lisa (1986), which this film does bare a vague resemblance to.

Extras on the disc include short interviews witht the director and most of the main cast members as well as a trailer.