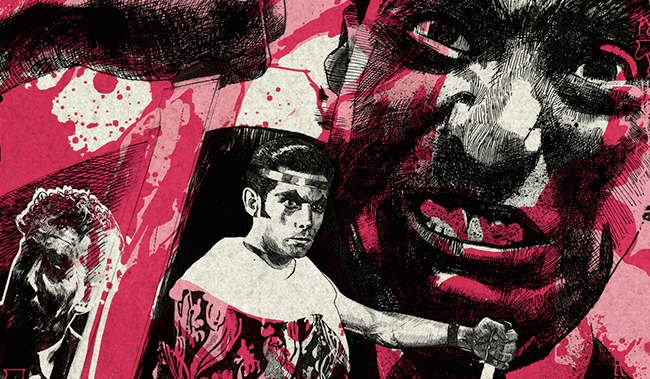 Last year Arrow Video released their ambitious box-set collection, ‘The Herschell Gordon Lewis Feast’, a limited edition collection of 14 of some of Gordon Lewis’s low-fi grunge films from Blood Feast (1963) through to one of the last films in the cycle, The Gore Gore Girls (1972). Not all of his films were what became termed as splatter films; there were teen riot films as well as rock and rollers and hillbilly films in between the low budget, dreadfully acted and gory splatter films, all with bright red paint-like blood and guts. Now these films have been split into individual double features (the other film with the main title on this release is Scum of the Earth, also made in 1963 and the director’s last of only a few films he made in black and white). Blood Feast was the better of the 14 films on the collection, although the splatter film and hillybilly film would blend to make the equally popular cult Two Thousand Maniacs! (1964, remade in 2001 and starring Robert Englund).

Blood Feast opens with a classic scene: a girl arrives home and switches on the radio only to hear of another murder victim. The woman proceeds to pour her bath water and climb in. Suddenely a shadowy figure steps into view and stabs and murders the girl, starting out by cutting out an eye and with some what look like guts on his knife before going on to cut up the rest of the body. The killer is one Fuad Ramses, a caterer who provides food catering to the Miami socialites. He uses his position to select his victims to provide blood, guts and limbs to deliver to his Egyptian goddess, Ishtar. In an overlong and laughably bad chase sequence at the end Fuad Ramses falls foul of a garbage truck and ends up being cut up on its blades with a cop stating in obvious fashion: “he died a fitting death for the garbage he was”.

Herschell Gordon Lewis died September last year and, fittingly the Amazon Video box-set was released just two months after and came drenched in documentaries including interviews with Gordon Lewis and interviews with those who love his unique brand of sicko cinema. He started out making skin flicks, low budget nudie cutie films. Blood Feast was his first splatter film and at only 67 minutes long, this is a quickie, whereas most of his films did generally run the standard length. Gordon-Lewis presented a new world, most of which would appeal to a limited audience younger audience. These films would only be loved by the few, but the few are loyal. In this country they would often be screened at Grindhouse screenings as double bills at places such as the now closed Scala Cinema.

There is something cheap and nasty about these films, but equally they present a world that is unreal, dreamlike or showing a darker side of the cliche of the American dream. Although Blood Feast (and the other splatter films) are poorly acted and quickly dirercted in an amateur style, the over the top blood and guts looks really unrealistic to a modern audience, even though he would often use real intestines and animal body parts but with an overly red bubbly and thick looking bright red plasma blood. One classic scene is in Blood Feast in which a girl is murdered and her tongue is pulled from her mouth – a shep’s tongue was used for this. Yet it went down as one of the film’s most notorious scenes. In conclusion this director’s films are not great, but he was a pioneer in delivering a new type of horror cinema, albeit exploitative that by the 1970s became the norm in low budget horror. He paved the way not only for some of the low budget exploitation horror films coming out of Italy in the late 1960s, but also for the likes of Tobe Hooper and even John Waters and Russ Meyer.

Blood Feast shares the disc with Scum of the Earth!, an exploitation films of his nudie cutie films about pornographers who lure girls into their studio to film and photograph them leading to sexual violence (there is a surprising amount of nudity for a film of this age). Other extras on the disc include several interviews with Gordon Lewis that cover the early part of his career including such nudie cutie classics as the voyeuristic The Adventures of Lucky Pierre (1961). The quality of the picture is outstanding on both films, bringing out the colours on Blood Feast perfectly.