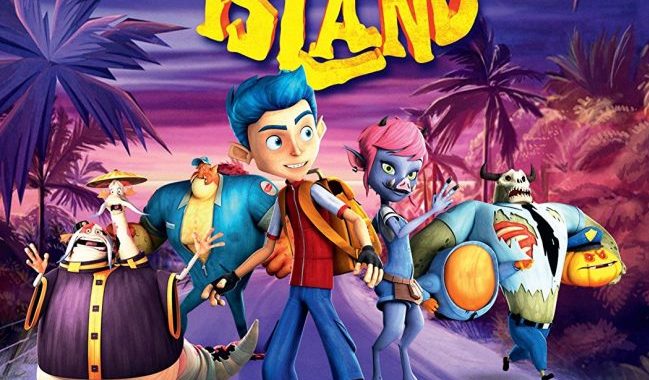 Horror for all the family and I am not necessarily talking about this film or horror in general but Halloween (and I don’t mean the film). That time of the year is becoming increasingly popular in the UK and although Monster Island (2017), a Mexican made animated film that was released in July in the UK and went completely under the radar. Now it see’s its DVD release in time for both entertaining the kids during the half-term holidays and for Halloween at the end of the month.

The premise of the film is standard fare with young Lucas wanting to go to a school party but finds himself grounded by his father. Lucas is a bright kid and even helps a fellow school friend against a bully. Lucas sets the bully up with a frog experiment during a biology lesson with the frog exploding in the bully’s face. However, when Lucas escapes from his father to go to the school party he is set-up by the bully and a girl he fancies and finds himself covered in green frog goo in front of everyone else at the party (referencing of course the pigs blood scene in Carrie, 1976). This has the effect of turning Lucas into a large scaley orange beast scaring away all the other pupils. No one is more horrified than Lucas who is eventually tracked down by his father and explains to him who he is.

Lucas’s dad explains that the family are all born monsters and when they become teenagers this is the age when the first transformation manifests itself. Lucas is angry at his father for not telling him, compunded by his dad telling him that the woman in a family photo is not his real mother but a model and that his late mother too was a monster. In his anger Lucas runs away from home and winds up on the island where his the family are from in order that they can he can feel that he belongs somewhere and gets caught up in a whole host of adventures.

Monster Island was made by the Mexican animation studio, Anima Estudios, the company behind the failed Top Cat reboot, Top Cat Begins (2015). The CGI animation looks unfinished and while the film is full of action it does seem to drag through its short 78 minute length, although I am sure it will appeal to many youngsters; the best characters being the pumpkin headed and cow skull headed cops. The film it relates to closest can relate to is probably Paranorman (2012), although that film was far superior and more inventive.

Monster Island has been dubbed into English from its original Spanish language version and it is a shame that there is not that option on the disc to draw a comparison (as with the Japanese Anime films it often comes across differently in the original language). Never the less Monster Island is not very original and follows along standard animated films plot lines (including the Disneyesque dead parent plot strand).