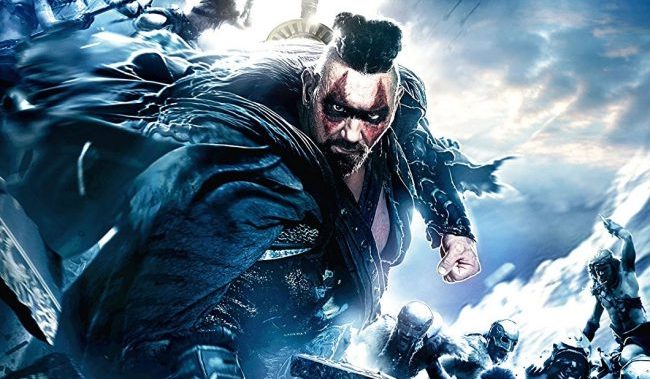 Released elsewhere as Enter the Warriors’ Gate (2016), this fantasy, martial arts, action comedy mash-up opens with a fantasy fight sequence between bulky ninjas fighting to save or kill a tied up Chinese princess. A monster creature is also thrown into the fight. Suddenly power level percentages appear on the chests of the fighters with the hero character dropping down to 5% before he battles back and beats the assailant monster. The viewer then realises that this is in fact a video game ‘operated’ by American high school teenager Jack (Uruah Shelton) who’s is playing against his overweight schoolfriend and neighbour. Jack also faces a gang of bullies at school and is able to out race them when they give him chase on mountain bikes. One day fantasy becomes reality when he wakes up with a Chinese barbarian holding a sword to his throat and asking for the Black Knight. Jack realises he means the Black Knight in the game. “Me”, he nervously responds. Others arrive too and have come through a magical gateway in a pot given to him from a Chinese friend who works in a bric-a-brac shop. Among those others is a young Princess he must look after (Ni-Ni). She has come from a Medieval period and is curious with this new world she finds herself in. Jack passes her off to his mother and friends as a Chinese exchange student and dresses her in yoof dress, rather than a traditional Chinese princess costume. Other barbarians arrive to kill the Princess and trash his house before he leaps back to Princess Su-Lin’s time and place. There he must save the Princess and defeat the barbarians led by the strong and wicked Arun (Dave Bautista) with the help of her protector, Zhoo (Mark Chao) in order that the Princess’s rightful place on the throne can be restored.

What the plot of this film says is that if you spend your days lazing away as a gamer, you too can aquire the skills to become a hero and save Princesses. Co-written and co-produced by Luc Besson, this film is a French-Chinese co-production filmed in the USA and China and, as one would expect from a Besson film, the action is brilliantly handled. This is from the bike chase to the martial arts fight sequences, of which there are many. Unfortunately the plot is an irritatingly annoying wish fulfillment fantasy. The Chinese coming over to the modern West and picking up the dance sequences which become adopted in Medieval China at the end would be culturally insensitive were it not for the film being a Chinese co-production.

One of the pluses the film has is the use of the latest action star, Dave Bautista playing the villain of the piece. Over the past couple of years Bautista is coming into his own with his Dwayne ‘the Rock’ Johnson physique appearing in such films as the last James Bond film, Spectre (2015), Kickboxer: Vengeance (2016) and the two Guardians of the Galaxy films. Here though, he looks more Mohawk than Chinese.

There is much so-so humour in Warriors’ Gate which for the most part mis-fires like the film itself. One half decent running gag is Arun’s sidekick killing off the wrong person after orders from Arun. Later a magician turns the sidekick into a giant goliath that young Jack must fight. The film, despite its €20 million budget has made no shakes and with the love interest between Jack and Princess Su-Lin is intended for no more than a teen audience, limiting its appeal further.