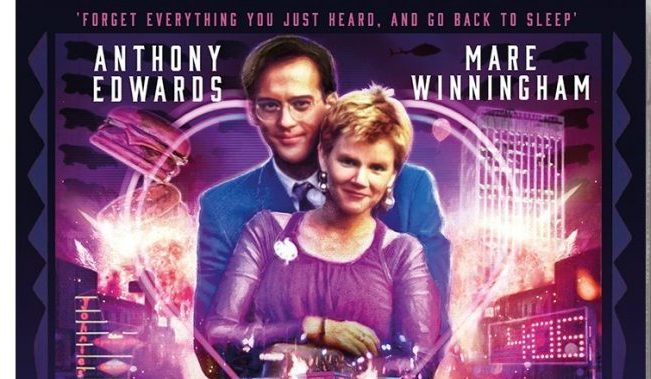 It’s hard to remember the level of fear and what it was like to live with the knowledge that was a possible 30 seconds from nuclear armageddon. The recent posturing by Messrs. Trump and Kim Jong-Un and, let us not forget a return of belicose language between the West and Russia. We are being brought back to those heady days of global destruction thanks to a few of our world leaders. The nearest the world ever came to this of course was the Cuban Missile Crisis in 1962 as well as a couple of other close calls.

Miracle Mile (1988) is a doomsday scenario film. It’s not a very good film, but kinda rolls out like a zombie film without zombies and is about survival with nowhere really to go but the main protagonist seeks a way to go. Most of the film is played in real time bar the first 15 minutes which follows a love story between a young couple who meet up. Harry Washello (Anothony Edwards) is a jazz musician who is just wandering through life, even in his young years. One day he meets Julie (Mare Winningham), a young (odd looking and quirky) girl. For the first part of the film we see their new and burgeoning relationship with the plot taking place over a single day and night. Harry agrees to meet Julie after her shift ends at the famous Johnie’s Coffee Shop at midnight. He oversleeps after a power failure in his flat, missing Julie. He wakes and heads down to the diner where she works, not realsing that it’s 4am in the morning. From 15 minutes in the film almost begins to play out in real time. He realises the time and has missed Julie, but answers a call from a public call box. The other end of the call a man screams that a nuclear war is about to happen. Harry retruns to the diner but starts to worry and pass on what he had just heard. When a business woman calls her contacts in Washington she too realises something is up and some of the diners plan to escape fearing that nuclear armageddon is about to strike. They all make their way to the Mutual Benefits Building and plan to escape LA in a helicopter. First Harry must risk everything to go to Julie’s apartment and save her.

There is little original about the film, other than the fact we are never really clear whether this is a dream or not. Nuclear armageddon films had been around since the 1950s, with some of the most notable being Dr. Strangelove (1963), Fail Safe (1964), The War Game, The Bedford Incident (both 1965), The Day After (1983) and the terrifying TV movie Threads (1984) among many others. Miracle Mile is a very 1980s addition to the cycle of films. Throughout the acting is quite awful and the situations, especially with Harry running around an all night gym seeking a helicopter pilot while all the muscle folks either stare blankly at him or run away. Some of the other scenarios, such as the scene where all the diner occupants escape in a van to the Mutual Life Building, the set-up is more laughable than dramatically tense.

Miracle Mile stars Anthony Edwards, best known as Goose in Top Gun (1986), resembles the likes of such 80s actors as Judge Reinhold or Richard Thomas. He nervously runs through the film and does play his part well. Meanwhile, his co-star is Mare Winnigham, an actress also very well known for 80s films such as St. Elmo’s Fire (1986) and Turner and Hooch (1989) looks odd with her boyish haircut and 80s clothes and is more than a little quirky here. The rest of the cast is filled with familiar faces: John Agar (an actor in many a B movie in the 1940s and 5os including Tarantula!, 1955 and supported John Wayne on more than one occasion), Earl Boen and Eddie (Reservoir Dogs, 1990) Bunker as the aggressive man at a garage. But the real star of the film are the locations of LA’s Miracle Mile including the aforementioned Mutual Life Building, the La Brea Park Tar Pits (the jazz concert in the park), some of Miracle Mile’s Art Deco buildings and of course the diner itself, Johnie’s Coffee Shop that had also been used in the opening scene in Reservoir Dogs and The Big Lebowski (1995). There is an extra on the disc with a reunion of some of the cast members getting back together at the diner, but an extra of the locations today would have been interesting. Another notable location on the edge of La Brea Park is the large Art Deco Asian Pacific building that had starred in the classic turkey, Xanadu (1980).

Miracle Mile looks great on the Arrow Video transfer (1080p high definition), that beutifully brings out the wonderful neon colours, light and nocturnal shots. It is in many ways a very 1980s looking film, but avoids the smoky atmosphere shots of many films of the decade. The wonderful ambient score by Tangerine Dream is also fascinating and adds atmosphere. It is uncertain whether the film was intentionally or unintentionally funny, but as bad as aspects of the film are, it is also interesting and certainly interesting. Other extras include interviews with the director and writer of the film, Steve de Jarnatt (who also provides a couple of commentaries), recent interviews with Edwards and Winningham, the music and deleted scenes among others.

An interesting time to re-release this film, maybe a return to the fear of the bomb and nuclear apocalyse will see a whole new cycle of armageddon films.