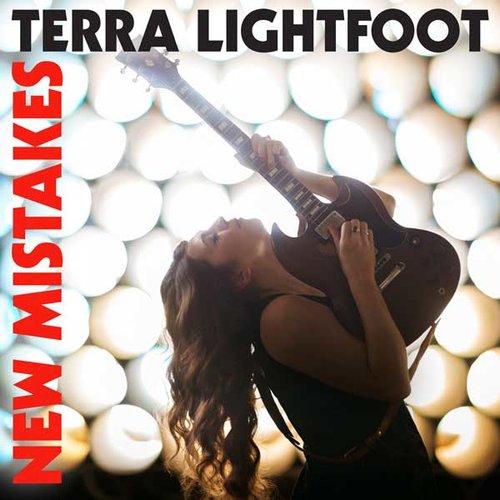 Canadian singer songwriter Terra Lightfoot’s first UK release, 2016’s Every Time My Mind Runs Wild, mixed some good rocking songs with more folky tracks. She now returns with New Mistakes and her third overall solo album comes with a strong blues rock sound. There are several good soft rock tracks here, but it is when she combines her Gibson SG with powerful and expressive vocals on the up tempo songs that her quality shines through.

The album opens with Paradise, full of big riffs and raw energy. The fast paced song tears along apace, vocals soaring over a full sound. Pinball King tells of a fleeting love affair, a short but passionate relationship that leaves sweet memories rather than regrets. The excellent Slick Back Kid starts with another massive guitar riff and has a fine swagger, a stylish love song with real attitude.

Norma Gale is a real highlight. Telling the story of a 70’s country singer who combined her touring schedule with life as a single mother, the track is poignant and reflects the strength of its inspiration nicely. Hold You is a soulful love song delivered beautifully, ending with a sax cameo from Jake Clemons, best known for his work with Bruce Springsteen.

Drifter tells of sadness at a former lover who cheated, but the tone suggests that the inability to settle down was ultimately his loss. The tables are turned in Two Hearts, where a woman loves two men. But there are no regrets here as Lightfoot shows off her wide vocal range. Of the slower songs, Three In The Morning stands out. A beautiful vocal performance evokes late night doubts amidst a cityscape where even Bleecker Street turns dark. Yet despite uncertainty and misgivings, you just know things will work out. This one should really have been the album’s closer, as it sums up a theme of resilience and just carrying on, of fighting through to the end.

Terra Lightfoot combines her undoubted songwriting ability with musical flair and a soulful voice. She has created an album with a classic bluesy rock sound, yet it never seems dated. Her songs of love and loss show emotional depth and insight, and the raw, almost live sounding, rocking tracks have energy and power aplenty. New Mistakes is her best release so far.