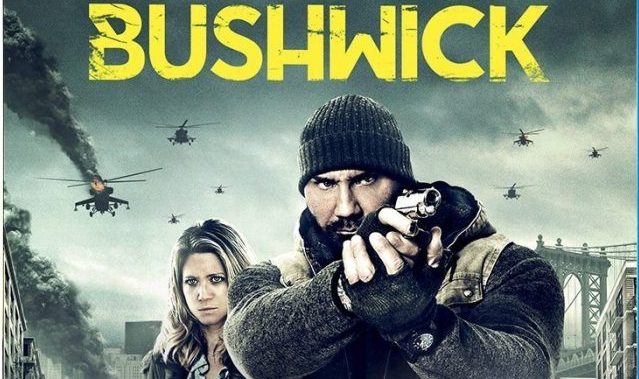 “Make no mistake, this is war!” ran the tag line for Bushwick (2017). We are living in uncertain times, not just in the USA but also in the UK and the rest of Europe. On an extra on the Kaleidoscope release for Bushwick, directors Cary Murnion and Jonathan Millott state that the origins of the story stem from a Texas Governor who suggested that Texas should cecede from the rest of the United States. There have been many recent discussions and debates, some very vocal about the offense the display of the old Confederate flag might mean. We have all heard the saying the “South will rise again”. Thanks to some voices, some of which have been condoned by the current President of the United States, Donald J. Trump there has been further heated displays of anger, most notably in Charleston, South Carolina with the removal of the statue of General Robert E. Lee. Bushwick somewhat plays to that, want of a better word, fantasy, but from a ‘crazy idea’ angle.

The film opens with a young couple, Lucy (Brittany Snow) and her boyfriend, Jose (Arturo Caruso) alighting from the subway train at Bushwick. They notice that it suddenly appears strangely quiet when a man runs down the steps on fire. As they make their way out to street level Jose is immediately blown up. Lucy finds herself alone and on a fight for survival as all hell has broken loose with snipers taking people out and drive-by killings. She makes her way into a house where a couple of the locals threaten to murder or rape her. She is saved by a heavy set man who calls himself Stupe (Dave Bautista) and tells her that he is a janitor and US Marine veteran. He offers to help the still traumatised Lucy and the pair make their way out through a series of buildings including to her grandmother’s, her original destination whom she finds dead. They then make their way to her wasted sister’s (Angelic Zambrana) house who had been out partying all night and is oblivious to what is going on. They later learn that there is a DMZ (de-militarized zone) to help them to safety a few dangerous blocks away.

Bushwick is a part of Brooklyn, east of Williamsburg that over the past few years has become gentrified. Yet the inhabitants of the neighbourhood are largely ethnic, whereas Lucy is clearly middle-class but has grown up in the locale. Conversely the invaders, a confederacy from the south (one captive says he is from Kentucky) appear to be white – any of those with visible faces behind their military black uniforms and face coverings giving the plot some clear racial overtones.

Co-produced by Nate Bolotin, co-producer of the brilliant action film The Raid (2011) and written by Nick Damici, writer of the zombie survival film, Stake Land (2008) and the atmospheric thriller Cold in July (2014), the film has some good credentials behind it. Reminiscent of George A. Romero’s The Crazies (1973) it has substituted a chemical spillage and disease to civil war but it’s fight for survival against homeland invaders makes for an interesting comparison. Never the less, it is a little let down by some obvious CGI and certain budget constraints – but at least it is shot mostly at the real location (with some scenes shot in Queens). The majority of the film has been shot with steadicams using long takes to keep the action moving, although the movement of the camera down to floor level is it follows the protagonists up the stairs is a little pretentious in places. What it does allow, however, is for the action to keep flowing without fast editing and inserts with the camera and the actors choreographing the action well.

The lead actor, Dave Bautista seems to be in everything at the moment, he is slowly becoming a less than polished, gruffer Dwayne ‘The Rock’ Johnson. He was in the Guardians of the Galaxy films as well as many other action films, appearing here once again as the tough guy. While Bushwick will not go down as a classic it has plenty of strengths and certainly is an interesting film made at a time in which the USA is clearly divided along lines of North/South issues and race, exaserbated further by the current administration. Extras on the disc include several interviews with the directors and the lead actors.