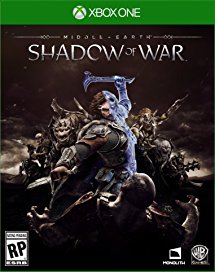 The long awaited sequel to Middle-Earth: Shadow of Mordor has arrived, and it’s as big and overwhelming as you might have expected. This is not to it’s detriment, the game is something else, it just takes a bit of getting used to.

Shadow of War takes place directly after it’s predecessor, and we are quickly thrown back into the heart of ranger Talion and the elf lord who shares his body, Celebrimbor. The game bids upon what made the first so memorable, a bigger focus on the Monolith’s greatest achievement, the Nemesis System; this makes all of what could have been forgettable enemies a face. Those who defeat you have jumped rank, are tougher now, and the vendetta is very real.

Our main ranger has been to Mt Doom, and forged a ring of power to defeat Sauron. However, the elf spirit is quickly captured by Shelob, and so Talion must trade his ring for Celebrimbor. From here, our story kicks off in earnest. The expansive, open world play is both inviting and gargantuan. Almost overwhelming at first, once you have spent an hour or so getting used to the gameplay, you’ll find it tough to switch it off.

The intelligent fighting style is more than simply slash and hack, as your ranger increases his awareness and capability, the moves you make against the orc horde become more intrinsic and, for lack of a better term, really fucking cool. Again, this is a jumping off point from what Shadow of Mordor had to offer, but this pales in comparison to the 2017 offering.

Those in the Tolkien faithful will notice that the story is somewhat loose when it comes to the source material – the additional ring being forged for one. You can somewhat give credence to poetic license, but the use of Shelob as a young woman as opposed to a massive, horrifying spider is one that ranks high in the ‘why?’ column.

While this isn’t necessarily an issue, the main problem with the game is the purchasable  loot crates. The basic premise of Shadow of War is the idea that you can defeat, overcome and break orcs into joining your army, one that you build from the ground up to defeat Sauron once and for all. There’s a thrill and sense of achievement in this, but you can give way to this by buying your orcs. This somewhat pales in comparison to the former, and the idea of loot crates within a full priced video game isn’t fresh, and this review won’t be the first or last to criticise it.

But knowing that you do not have to succumb to it, it can be brushed to one side. Those who choose to play this game as Gandalf would have intended can do so, and the Nemesis system in place means you will enjoy the thrill that bit more. It makes everything a bit more personal, from the relationships you build with friend and foe alike, to the feeling when you have crossed the finish line.

Middle-Earth: Shadow of War is an expansive piece of work, one which has it’s own cheat sheet built into the operating system. Should you choose to overlook this, there is so much that you can take away from it, and enjoy. This is a game you won’t mind divulging hours to, one that is a joy to play, and somehow manages to surpass it’s near perfect predecessor, which is some feat in itself.

Middle-Earth: Shadow of War is released on Oct 10th, 2017 for Xbox One, Playstation 4 and Microsoft Windows. This game was reviewed on Xbox One.