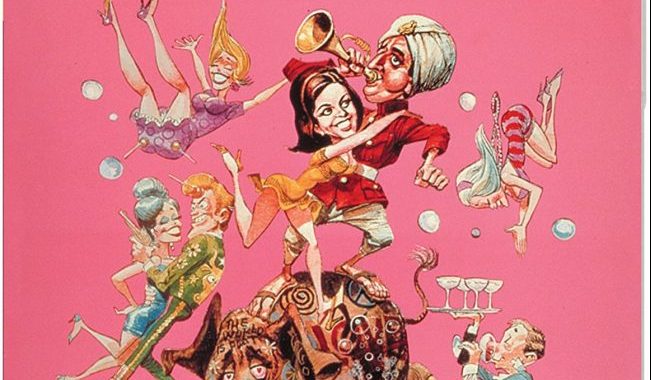 Blake Edwards and Peter Sellers were a strong team for each other. With The Party (1968) and the 6 Pink Panther films they did together starring Sellers as Inspector Clouseau, the pair proved to be the perfect foil for each other. In fact with The Party it would not be unreasonable to state that his character of Hrundi V. Bakshi, the incompetent and accident prone Indian actor is Inspector Clouseau in brown face. Of course this was not the first time he had played an Indian, returning to a role similar to a similar as that of the Indian doctor in The Millionairess (1960) in which he played opposite Sophia Loren. The relationship between Edwards and Sellers was was testy at the best of times, but the results were worth it.

The film opens with a film crew shooting a scene supposedly set in the Indian Northwest Frontier with an ambush on British soldiers by Afghan forces. An Indian actor, Hrundi V. Bakshi (Sellers) blows a bugle and refuses to die when shot at. The director shouts cut and becomes exasperated by Bakshi who destroys the set and ruins scenes he is in before being fired by the director and producers. The producers are furious and word gets back to the studio head, Fred R. Clutterbuck (J. Edward McKinley) who writes his name down. Through an admin error Clutterbuck’s secretary accidentally invites Bakshi to a large dinner party hosted by the studio head. He duly accepts and arrives and with his clumsiness either directly or indirectly causing chaos at the party including creating plumbing problems, food fights and even an elephant in a swimming pool.

While there is an Inspector Clouseau/The Pink Panther type of characterisation or set-up in the film, the style is quite different as most of the film required a good deal of ad-libbing from the actors. Of course the party iteself is the central element of the film. There is relatively little dialogue with much of the slapstick comedy resembling a Keystone or silent comedy, a period of cinema director Edwards was very inspired by and very much wanted to emulate. It was only at Sellers’ request that dialogue was included in the film in order that he could give some character to his role. In that sense it was consciously made as a silent film with some dialogue. One of the central non-speaking roles was the drunk waiter (Steve Franken) who looks and behaves very similarly to Harry Myers who played the drunk millionaire in Charlie Chaplin’s City Lights (1931). The other silent aspect of the film, the ambient sounds and background conversations at the party at the modern house is very reminiscent to the house and the style of Jacques Tati’s Mon Oncle (1958) who’s similarities are not commonly referenced; this includes the way the protagonist interacts with the modern contraptions of the respective houses.

There are many aspects to the film that are very much of its day from the modern house, to the music and the fashion. To get the scope for the gags that Edwards was hoping to use for the film a set was designed, with the finished result somewhat resembling a Ken Adams designed James Bond set. There were bridges over a swimming pool (that can also open up), open spiral stairs and modern seating. In one scene Sellers plays with a console (that even has an oscilloscope) and speaks into a public address speaker, as well as flicking switches that opens up the pool and increases the fire in the fireplace.

Many of the characters are types, including one Harvey Weinstein type producer who tries to entrap a young French female actress, Claudine Longet. The Party is not original but it has its funny moments and is vintage Blake Edwards/Peter Sellers. Extras on the disc give an interesting impression on the fun on the set during the making of the film. One extra even talks about an innovation of using a video camera on the front of the main camera in order that the cast and crew could see what had just been filmed, something unheard of to this point.