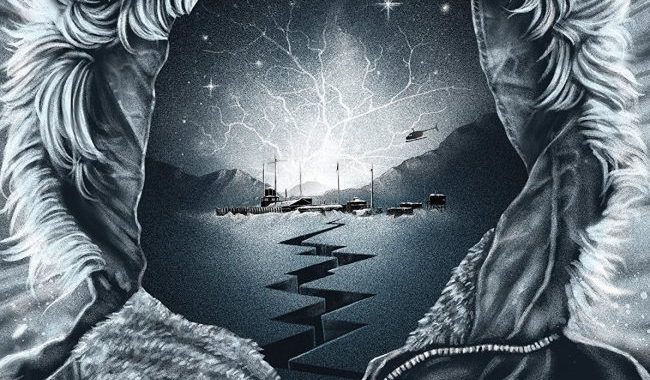 The opening soundtrack to The Thing (1982) with its ambient pulsing slow bassline would indicate that this is a John Carpenter film. Whereas previously Carpenter had written the distinctive simple music phrases to his films, this time it was written by one of the best loved and most celebrated cinema music composers, Ennio Morricone. Carpenter is a most beloved of directors and one of the leading game changers of the 1970s with his oeuvre including the horror film (Halloween, 1978), a film about a siege by unseen assailants (Assault on Precinct 13, 1976) and he has even had ambitions at making science-fiction on a low budget (Dark Star, 1974). The Thing brought all those elements together and would star an actor who would become the actor identified most with Carpenter, Kurt Russell.

The Thing was adapted from the John W. Campbell Jr. story ‘Who Goes There?’ that had been published in 1938 in the pulp science-fiction magazine Astounding Science Fiction. This story was picked up by Howard Hawks when he made (well as a producer at any rate) one of the first of the 1950s atomic age/Cold War science-fiction classics, The Thing (From Another World) (1951). The plot of that film is set in Alaska with a military scientific team searching for a flying saucer crashed into the ice. They discover an alien, mostly made of vegetable who kills off the research and search team.

Carpenter’s treatment of both Campbell’s original story and Hawks’ film borrows well from both these versions but added an extra frisson of atmosphere. Indeed Carpenter’s film is closer to the original story, even if he has paired down the number of characters. It opens with a helicopter chasing a sled dog through the snow as they try to shoot the dog. The events wind up at an American Antarctic station where the team here are confused by what’s going on. The helicopter lands is blown up and an assailant with a gun is shot dead. The American team discover that the two men who were attacking the dog were from a Norwegian research station. They add the dog to their team of sled dogs. A helicopter pilot, MacReady (Kurt Russell) and Dr. Copper (Richard Dysart) find the Norwegian outpost where everyone there had died a violent death with some burnt out corpses outside. They find two other horrifying discoveries: a sort of human form that had fused together with another body and an alien saucer that had been buried deep in the glacier (estimated to have been there some 12,000 years). They take the melted human form back to their Base Camp to carry out an autopsy. It doesn’t take long before they realise that what they have dug up is even more horrifying than they had originally realised. It soon becomes apparent that the tissue is still alive and can adapt. When the captured dog becomes an alien monster that kills and takes over other dogs there is the dawning realisation that the creature is a shape shifting alien that takes over its victim’s body. Inevitably, this leads to paranoia as to whether the rest of the crew are an alien creature or human with blame and accusations being thrown around.

Carpenter’s film is closer in plot to Campbell’s original story than the 1951 film, although Howard Hawks style and snappy dialogue is evident in the film. Howard Hawks has clearly been one of the biggest influences on Carpenter as previously the basic idea of the western Rio Bravo (1959) formed the plot of Assault on Precinct 13. With this film, as with his preious efforts Carpenter was able to push the bounds of horror. There are many shocking and memorable scenes that will stay in the mind. It can’t be forgotten that this film was made before CGI with some inventive spfx requiring some extraordinarily ambitious prosthetics and mechanics. Whereas in the Hawks film, in which the alien is like a Frankenstein carrot, in Carpenter’s film it followed closer to the descriptions by Campbell in his original story that required some inventive special-effects. Equally, like many of the 1980s horror and science-fiction films there is a strong use of guts and dripping mucous that the director here uses to good effect; not least of all the scene in which the chest of one of the victims opens up, the head becomes separated from the body and grows spider legs before scuttling away. These images can’t be unseen – once seen never forgotten.

Another huge influence on the film is Alien, a direct descendent that was made some 3 years previously to The Thing. Arguably if Alien had not been made Carpenter’s film may have looked very different and in that sense both are very much sister films. The Arrow Video release is loaded with many interesting, fascinating and insightful extras including a 74 minute retrospective on the film that includes the origins of Campbell’s story and a good deal of attention on Hawks’s film, so strong was its influence. There is also an interesting featurette called ‘1982: One Amazing Summer’ that gives a chronological look at all the horror, fantasy and sci-fi blockbusters released that summer season. As well as some vintage featurettes and a panel discussion there are also development notes and pieces on the creation of the creatures. John Carpenter’s film rightly deserves its place as one of the truly great films of the 1980s and still looks good and fresh today on this new package.