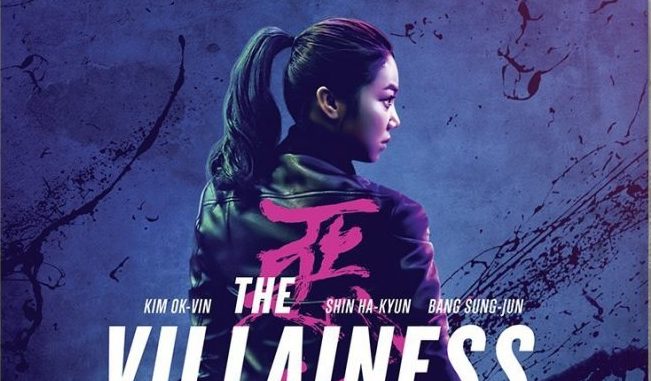 The Villainess is a hi-octane adrenalin fuelled martial-arts action film from the outset. From the opening scene our heroine slashes and hacks away at an onslaught of gangsters. This is quite a conscious reference to the hero hacking away at his captors with a pair of hammers in a key and memorable scene from Chan-wook Park’s Old Boy (2003). There is a disctinct between both films though that is shot not just as POV, but as though it were a video game, and my this player seems to have 9 lives. We see her re-load her gun and slash away at her assailants as tough it were a video game. After she leaves the corridor and finds herself in an open gym she finds that she has more attackers to deal with (level 2?). When she is thrown into a mirror in the gym, this is the first time we see her and realise defintely that this is a woman. That is a full 8 minutes of relentless hack, slash and bludgeoning. Are we meant to be shocked that she is a woman? That the title is gendered, I guess not. Which is another thing – it does seem to be disingenuous to call this woman the villain; she is more victim than villain.

Dae-su Oh (Min-sik Choi) is caught by the police after she leaps out into an alleyway where she is captured by the police and taken to a secret training facility to be a sleeper assassin after the authorities become aware of her special skills. We also discover that Dae-su is pregnant. She is allowed to have her baby and we are aware of how long she is here for training as we see her daughter growing into a toddler. When she has completed her training, Dae-su is released into normal life under an assumed name and must carry on in obscurity until she is called to do a job. It’s not long until she is ordered to carry out a hit. She is even wooed by a young neighbour (Jun Sung) who wears her down with his persistence and she ends up marrying him. When she is ordered to carry out a hit on her wedding day her past threatens to come back to her.

If the plot seems somewhat familiar, it’s because the plot is similar to Luc Besson’s Nikita (1990). Even the scene where she carries out a hit on her wedding day is very similar to the engagement vacation Nikita makes with her lover to Venice. But The Villainess is not a remke of Nikita, but does follow along similar lines and there is little let up in the action even right down to the showdown car, or rather bus chase at the end. One of the most impressive chase sequences is on motorbikes with a miture of stunts and CGI that looks very impressive indeed. But other films spring to mind, not least of all the Kill Bill (2004) films with its action packed revenge story as well as those films predecssors, namely the likes of Miko Kaji’s Japanese films from the 1970s, such as the Lady Snowblood and Female Prisoner Scorpion films.

There is little room for melodrama here or much in the way of character set-up as the action is remains hi-octane throughout. The action almost seems relentless but keeps the film moving at a cracking pace. Having said that it does have a couple love interest moments that appear to be a little cliche ridden, but never the less they fail to to get in the way of the action.

In the early 2000s South Korean cinema was riding the crest of the wave of international recognition with the likes of Chan-wook Park and Ki-duk Kim’s films seeming to have successes one after the other, although over the last few years there have been fewer of what became known as Asia Extreme. It would be good if The Villainess oversaw a resurgence of these action and horror thrillers.