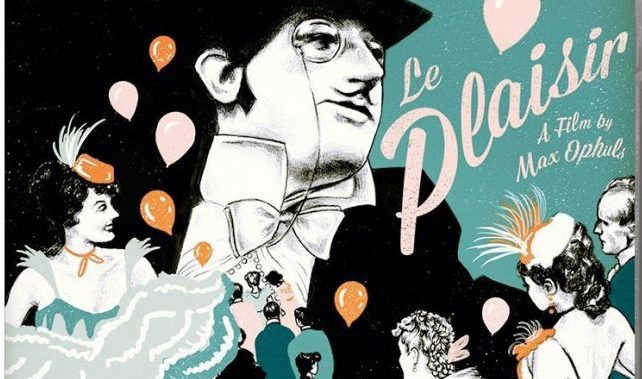 Max Ophuls’ Le Plaisir (1952) is a three story anthology based off short stories by fin-de-siècle French writer Guy de Maupassant, a writer best known for the novel ‘Bel Ami’ written in 1885. The two stories that bookend the central one are shorter, but until the very end very little actually happens in the film. What is clear in all the stories is that they seem to represent some of the cliches of fin-de-siècle France: balls, prostitutes and artists.

The opening segment, ‘Le Masque’, appropriately opens with a very typical belle epoque cabaret ball, with the swirl of costumes and flowing addresses moving with the jolly music, images so familiar from the paintings of Édouard Manet and Toulouse-Lautrec among others. One of the well dressed bourgeois figures is a man dancing among the young women. Something seems odd about him until it is revealed that his face is in fact a mask disguising the man’s real age.

The second story is the longest one of the three taking up over two thirds of the film. ‘La Maison Tellier’ is the story of a woman (Madeleine Renaud) who runs a brothel in provincial France. The brothel is popular among the petit-bourgeouis inhabitants of the town. When the Madam is invited to attend the First Holy Communion of her niece in a country village she closes shop and takes all the working girls from the brothel with her, creating a disjunction between the painted prostitutes and the traditional country folk at a religious ceremony. The closure of the brothel also upsets and leaves the clients lost as what to do on a Saturday night.

The final story, ‘Le Modèle’ was a far simpler one than the one envisioned by director Max Ophuls. He had intended for the final story to be ‘La Femme de Paul’ which, like ‘Le Masque’ was to have many extras and elaborate sets with the location basis to be a replica of Renoir’s painting, ‘La Grenouillère’. However, due to money running out the simpler ‘Le Modèle’ was filmed instead. This is a love story about an artist (Daniel Gélin) and his model/muse (Simone Simon). But when he grows tired of her she resorts to drastic steps to win him back, with a brilliant ending shot conceived by Ophuls.

Apart from being based off Maupassant short stories the link between the three stories is, as the title suggests, pleasure, in order: pleasure meets love, pleasure meets purity and finally, pleasure and death. Ophuls of course imbues the film with sophistication and elegance and draws not only on Maupassant’s works themselves but on the imagery we have of late 19th century France through Impressionist and Post Impressionist paintings which undoubtedly inform this film from the brothels, to the pastoral French landscapes and train journeys.

The middle story in the film is by far the longest and literally central one. The other two stories do to some degree feel like framing stories. All the stories have there complexities, whether it is the dynamic and exciting cabaret ball in the first story or the dramatic end shot to the ‘Le Modèle’. There is a mixture of location shooting and artifice in the film. In ‘La Maison Tellier’, the scenes shot in the town at the beginning and end of the story are very obvious sets, whereas once in the countryside it is pure location, other than the interior of the church and the lunch reception after the communion. Filming in a studio has allowed Ophuls to make some very effective long flowing camera movements: the long shots of the guests arriving at the ball and the wonderful dance sequence. In the final story, it is the brilliant and imaginative suicide shot, whereas in the central story it is the fluid movement of the camera as it moves from the door of the brothel and cranes up to the upper windows and into the building.

Such well known names in the film such as Danielle Darrieux and Jean Gabin are minor players in the film, while everything else around them and the atmosphere the film creates that draws the viewer away from the actors. The film does feel artificial in many parts and three stories don’t necessarily work well together but this is an undoubted classic and typical Ophuls. There are some wonderful extras on the Arrow Academy release, including a documentary on the pastoral scenes in the ‘La Maison Tellier’ story and re-visits the locations in Suisse Normande region, south of Caen in North West France. There is also an interesting interview with the films assistant director, Jean Valerie who speaks with both admiration and about what a cruel taskmaster Ophuls could be. There is also an interview with Ophuls’ son, Marcel. It’s good to see a recent rise in releases of films from the 1950s, pre-nouvelle vague.