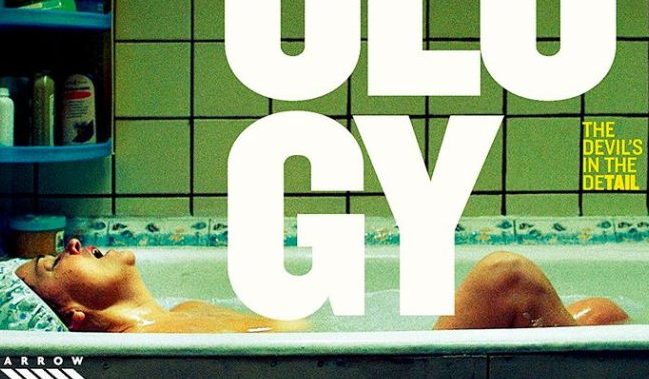 Zoology (2016) is a strange film, it is also a very realistic film that takes the one strange element and makes an effort to normalise it. Yet the film’s one act of oddness is that the middle-aged protagonist has grown a long tail. With that comes superstition and alienation by the local community. It’s a film that perplexed audiences in its native Russia and has delighted them in Europe.

The main character in the film is a middle-aged and lonely spinster Natasha (Natalya Pavlenkova) who lives alone with her ageing mother. She works as an administrator in a local zoo where she is mocked by her co-workers. Her life is surrounded by gossip and superstition from these women as well as others she comes across. As a result Natasha doesn’t have any friends. But Natasha also has a secret – she has grown a long tail. She goes to the doctor and explains matter of factly about her tail. When she is sent to the radiologist to x-ray her appendage she is shy to show him, but again the tail is treated in a matter of fact manner by the young radiologist called Peter (Dmitriy Groshev). When the x-rays don’t turn out well she is sent back for further shots and offers Peter a bottle of wine to say thank you. He refuses, but does take her out and the pair bond, he becoming increasingly attracted to her and accepts this older woman, tail and all. Natasha transforms herself with a makeover from a dowdy woman to a more milfy kind of woman and grows to accept herself, even if the hostility and ill treatment at the hands of her work colleagues remains.

Released by Arrow Academy, Zoology is only the second feature from this young Russian filmmaker. Ivan I. Tverdovskiy’s first film, Corrections Class (2014) is set in the provinces and deals with attitudes to mental health and in many ways this sencond film deals with similar provincial attitudes and how superstitions become social norms. Tverdovskiy is highlighting that Natasha is an individual and this is one of the critiques’s the director is making with the film that within society, even one imbued with superstition, individuality is frowned upon at best and leads to alienation and rejection at worst. But it doesn’t even stop here, as Natasha is also rejected by the church, the medical community, her work colleagues and finally by her mother. The tail itself has also been read a phallus and the scene in the bath where she finds a new use for the tail would underscore this, as well as reading Peter’s attraction to Natasha being because of the tail, rather than in spite of it.

The film is interestingly shot, mostly with hand held cameras, as is typical with many Eastern European films and shot with drab colours and muted tones in including it’s coastal Black Sea locations. It can’t be forgotten that despite this being a story of a woman with a tail it is very much a realist film as opposed to a fantasy film, making the idea of a woman with a large tail all the more strange. It does have the look of a Lars Von Trier film, a filmmaker that Tverdovskiy has acknoweldged as being an influence in the ambivalence between the fantastic and realist. There are few films like it and doesn’t have any real comparisons, but is never the less an interesting tale of a woman with a tail.

Extras on the disc include an interview with Dmitriy Groshev who plays Peter, the radiologist, as well as a good and substantial analysis of the film by film historian Peter Hames.