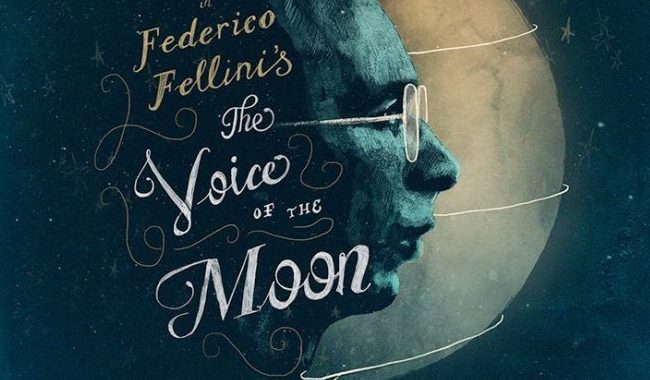 The Voice of the Moon (1990) is not only a late film in Federico Fellini’s career, it was his very last film. Many of the themes in fhe film the maestro had explored in previous films and as ever retains its Italianess. It follows the story of Ivo Salvini (Roberto Benigni) who has recently been released from a mental health facility. The film opens with Ivo believing that the moon has whispered his name. He comes across a group of men on some waste land who are giving money to another man to allow them to spy on his overweight aunt seducing a male suitor. The men tell Ivo to go as he hasn’t paid up. The film then follows Ivo as he meets a variety of strange characters living on the margins of society. He meets his old friend, the elder Gonnella (Paulo Viallaggio), another is a man who plays oboe and sleeps in a cemetry, as well as a man who spends his time contemplating and meditating on rooftops. Through the film he comes across an assorted band of characters including a failed attempt to seduce a lady he is in love with called Aldina.

Later in the film three madcap brothers have captured the moon and have stored it in a stable eventually causing something of a cause célèbre allowing the media circus to come to town. Many of these themes and the style of the film have appeared in the more classic and better known films in Fellini’s ouevre including Otto e Mezzo (8½) (1963) as well as Roma (1972) and And the Ship Sails On (1983). Despite the poetry of the film it doesn’t feel as fresh as the aforementioned films when they were first released. Never the less the poetic sensibility of the film is undoubtedly evident, aided massively by the presence of Roberto Benigni and the mixture of urbanity and artifice of the film. However, the film never had the impact of his previous work in the USA it had the negligible status of being the only Fellini film never to even get a distributor or a theatrical release.

Benigni has made a good career for himself playing idiot savants in a whole body of work including in Il piccolo diavolo (1988), the Pink Panther spin-off, Son of the Pink Panther and most famously of course in his Oscar winning role in Life is Beautiful (La vita è bella) (1997). In all these films Benigni lends a great deal of dignity and humanity to his roles and does so again in The Voice of the Moon. In lesser hands this may not have held the film together as well.

The Voice of the Moon is a little dull in places and a little overlong at 120 minutes but is an interesting film, not least of all that this was Fellini’s last film. The only significant extra on the disc is a documentary as a supposed American journalist traces Fellini and asks him if she can watch him work.