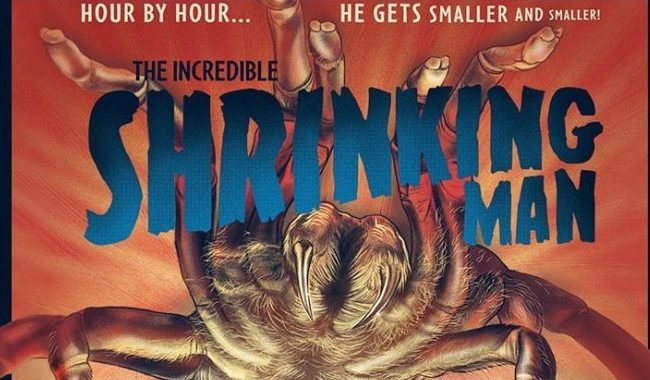 In August this year one of the crazier Summer news stories so typical of the season was the story of a mysterious toxic haze that came to the Essex coastline that made a number of people sick. The cause was never truly identified, despite the theories. A similar occurence happens at the beginning of The Incredible Shrinking Man (1957) which has shows a couple vacationing on a boat borrowed from his brother. A jovial domestic transpires when the husband, Scott Carey (Grant Williams) who as a macho joke tries to convince his wife, Louise (Randy Stuart) to get him a beer from below. She acquiesces and while Scott is bathing on the deck of the bow a mysterious mist appears from nowhere and engulfs him, leaving a sparkling haze over his body.

6 months later Scott begins to suspect that he is losing height. At first Louise laughs it off but after his clothes and shoes no longer fit (I know the feeling, but the other way round) and his wedding ring falls off they begin to worry. Even the doctors laugh it off until they visibly see he is smaller. The doctors recognise an unknown gene after they carry out further tests. When he is about 3′ foot tall you won’t be able to help but raise a titter as Scott sits on chairs kicking his feet and getting on a chair to look at out of the window. Needless to say that this starts to impact their relationship and Scott (perhaps again more titters) befriends a midget woman from a local freak show. When he gets too small he moves into a doll house. One day Louise goes out when the cat starts to terrorize Scott and chases him out of the doll house. Scott ends up being chased and falling down into the basement. Later Louise comes back and finds some ripped shredded clothing of Scott’s and assumes he has been killed by the cat. The rest of the film is where the film really starts to get interesting as Scott starts to explore and learn to survive in this new alien environment that is his own basement. There he finds a nemesis in a hairy spider and is also almost killed by a leak and his search for something to eat.

The special-effects in these scenes are outstanding. As Scott is shrinking it is merely outsized furniture props, some of which recall another earlier classic and superb film, The Devil Doll (1936) in which a minature woman is used as a killer. Only in the scene with the cat attempting to get to Scott in the doll house does the effects look like processed back projection (the cat scene is given prominence on the posters for the film); given the age of the film they are well done. When he is fighting in the environment in the basement and especially the spider the special-effects come into their own and are clever – many of the objects of course being seen in ‘normal size’. For example the pencil that had given Scott such solace when he was writing his diary once again saves him, preventing his small sized self from being washed down the drain. Other objects such as the pin and thread, symbolising the domestic like of his wife is now used in the defence against an outsized spider.

The original source novel for the film is ‘The Shrinking Man’ by writer Richard Matheson. Matheson insisted he be brought on board as the screenwriter and although there are changes to the novel the script and collaboration with director Jack Arnold works well. Matheson also wrote ‘I Am Legend’ which became the basis for three different films: The Last Man on Earth (1964), The Omega Man (1972) and of course I Am Legend (2007). There is a great deal of psychology at play in this film, perhaps more than in any other fantasy film of the 1950s as the rather self absorbed and even sexist Scott we see at the beginning of the film on board the boat becoming demasculated and insignificant as he reduces in size, played out through his frustrations with his loving wife. It is only when his wife can no longer figure in his life as he fights for survival in the basement that Scott becomes a decent human as he understands the basis of life. Conversely as he begins acceptance of his state in the basement, finally proclaiming that he will will continue to shrink, that after all “To God there is no zero” in one of the most profound lines at the end of any film (allegedly written by Arnold) whereas Universal Studios of course wanted a happy ending where he is restored to normal size.

There are several interesting extras on the disc, including an interesting condensed Super 8 version for home cinema, an interview with Matheson’s son and an interesting documentary about Jack Arnold as an auteur and genre director. In the 50s Arnold alternated between westerns and science-fiction and fantasy cinema, making many key films of the decade, some of which were in 3D: It Came From Outer Space (1953), two Creature From the Black Lagoon films (1954 and 1955), Tarantula, Monster on the Campus (1958) and of course The Incredible Shrinking Man. He was clearly a director of some intelligence and this film represents the height of his artistic powers with It Came From Outer Space on an equal footing.