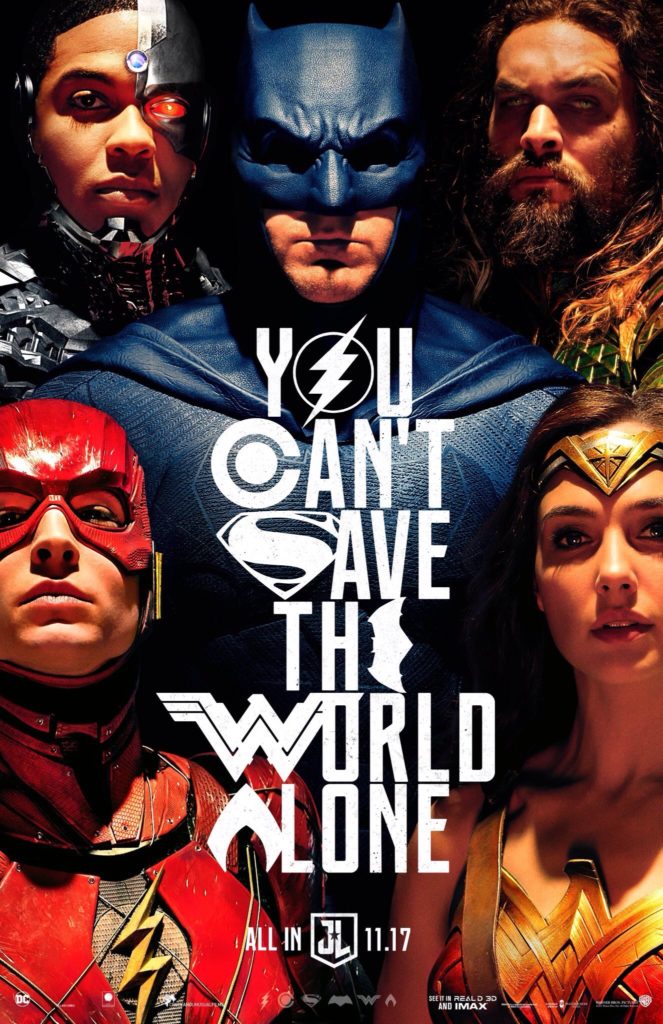 Following the death of Superman (oh, spoiler), the world is in mourning. There are black veils across the globe bearing his symbol. And with this sadness, comes vulnerability. With no protector, alien super villain Steppenwolf (Ciaran Hinds via motion capture) turns up with his parademon army to find the 3 Mother Boxes. These were hidden and buried in the Earth centuries ago, and are a source of absolute power.

Seeing the coming threat to the planet, Batman (Ben Affleck) decides it’s time to put together a team of meta humans, some he’s met before, some who’s profiles he came across during BvS: Dawn of Justice. This alliance, putting their various differences aside, pull together to take down Steppenwolf and his other worldly army, and hope to do Superman proud in the process.

Hope seems to be what Justice League tries to inject into the franchise, now 5 films deep. Whatever about the much needed levity when looking at Batman v Superman, a film so dour and convoluted, it needed an extra half hour footage to explain itself. Wonder Woman did a lot to turn this lot of films in the right direction, with t’sown band of optimism. But if the fulcrum of this film is hope, then there is a misstep somewhere along the way.

To truly show how much Superman meant to the world, Justice League film opens with smartphone footage of the man of steel, being interviewed by young boys after another inhumane task completed. We se Superman in a light we haven’t before; children looking up to him. Bruce Wayne adds to this later in the film, calling Superman a “beacon of hope” that has left the earth.

The fact of the matter is that, he isn’t. At least, not this version of Superman. This is the their time we have seen Henry Cavill’s iteration of the character on screen, but here he completely deviates from what we saw previously. In Man of Steel, he was a fledgling alien, misunderstood. In BvS, he was feared; a huge part of why Batman went after him in the first place.

How, in death, the character can become such a beacon of hope, is astounding. And this is nothing on Cavill, he has played the character as it has been written. But it’s a bit jarring to see him become Christopher Reeve in the flashback sequences we have here, considering what we’ve seen in the past.

And this is a summation of the film, clumsy writing, trying to fit pieces of a jigsaw that simply don’t mesh. A product of 15 – 20% reshoots following Snyder leaving the project, sadly due to a family tragedy. Joss Whedon, of Avengers fame, came in to take over the reins and earned a screenplay credit.

Of the players, he standout is Ezra Miller’s Flash by some distance. His characters brains moves at a mile a minute, and him with it. So giddy and excited just to be included, his shtick doesn’t tire as the movie wears through it’s 2 hour runtime. Gal Gadot again delights as Wonder Woman, relishing a meatier role than BvS and, arguably, her stand alone title.

Jason Momoa’s Aquaman does little more than be an absolute bro, but it works for the character, while Ray Fisher’s Cyborg, who has one of the most important jobs over the course of the film, somehow has the least impact on screen.

But the focus is always going to be on Affleck’s Batman. The reluctant leader of the team (he even pushes Wonder Woman towards the mantle), he does seem out of place as the only non meta human of the group, and often gets left behind when the action ramps up. Affleck seems jaded in the role, a worry considering his tentpole film is set to shoot in the near future.

Somehow, the scenery seems jaded too; a direct result of poor CGI. There is a shot of Aquaman, early on, as he wades into the ocean, and you can pretty easily makes out where the pool meets the green screen. And the least talked about Steppenwolf, the better.

Is there an argument that this was done to seem closer to a comic book? It’d be a pretty poor argument if that was the case. The fact is that comic books are far more cohesive than the product on show here. Sure, there are some genuinely fun pieces to be found throughout the picture, and the Joss Whedon scenes pretty much leap out when they occur, but these only go on to highlight the fact that the DC films still lack that identity which they need to truly prosper.

Ultimately, films such as this end with a tease of what’s to come. DC, for the first time, delve into the theatre of post credits scenes. One can hope that what’s to come builds from this, instead of trying to reinvent itself, and it’s characters, once more.