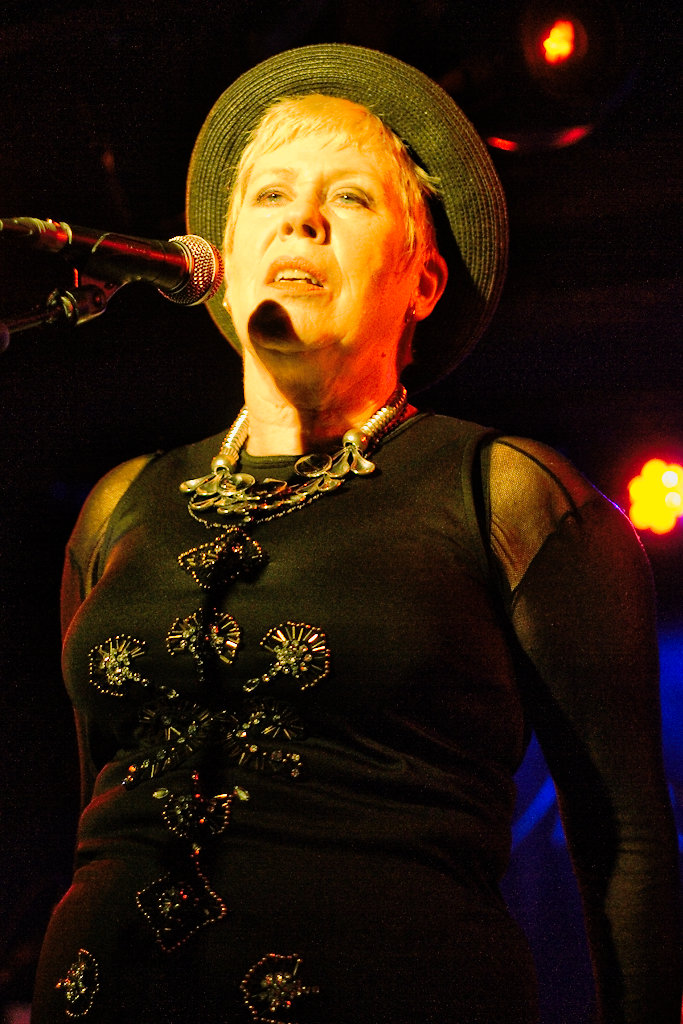 It may be more than thirty years since she came to prominence with the film Breaking Glass, which spawned several hit singles in the early eighties, but Hazel O’Connor has still got star quality. She entertained a sell out Glasgow crowd for nearly two hours with a selection from across her extensive back catalogue and several very good cover versions too.

O’Connor has toured in various manners over recent years, playing with a harpist, as an acoustic solo artist and also as part of a jazz inspired trio. But this tour sees her fronting a full band once more, giving those well loved songs new life and power. Hazel O’Connor is an accomplished frontwoman, comfortable in the spotlight and interacting well with the noisy Friday night crowd.

Her backing band played a large part in the success of the show. For this tour she is reunited with her brother Neil, once frontman of punk band The Flys, on guitar. She is joined at the front of the stage by Sarah Fisher, formerly of the Eurythmics, on keyboards and vocals and saxophonist Clare Hirst, who has played with many stars including David Bowie. Her brilliant sax work was a real highlight of the night.

O’Connor opened the show with several older songs. Decadent Days and Monsters In Disguise were played with great energy and Calls The Tune, written for Blair Peach, who died after an Anti Nazi League demo in 1979, was as passionately delivered as ever.

The cover versions included a fine version of Nina Simone’s Do What You Gotta Do, played as a trio with Sarah Fisher and Clare Hirst. This one was sung in near darkness to a crowd that was quiet for just about the only time. Hanging Around followed, in a very different arrangement from The Stranglers’ original.

Several different band combinations on stage saw O’Connor play Time Isn’t On Our Side as a duet with her brother Neil and If Only, the fine closing song from the film Breaking Glass, with Clare Hirst. O’Connor came together with Hirst and Fisher again for I’ll Give You My Sunshine, a poignant song written in her mother’s final days. Perhaps the highlight of the night was the classic Will You, a fine vocal performance more than marched by the sax solo from Clare Hirst.

The set was closed with a cover of Danny Boy, described as the “non plastic Paddy version” and a rousing deliver of O’Connor’s best known song, the 1980 top ten hit Eighth Day. The crowd demanded an encore and the band soon returned to the stage, ending the night with an extended singalong in Still Breathing. Only a tight curfew prevented O’Connor from playing on, as she looked to be enjoying the show as much as her fans were.

The Mega Plus Tour continues across the UK into December. It is well worth taking the chance to relive old memories of some great songs from the eighties that are delivered with a freshness and tremendous energy by Hazel O’Connor.