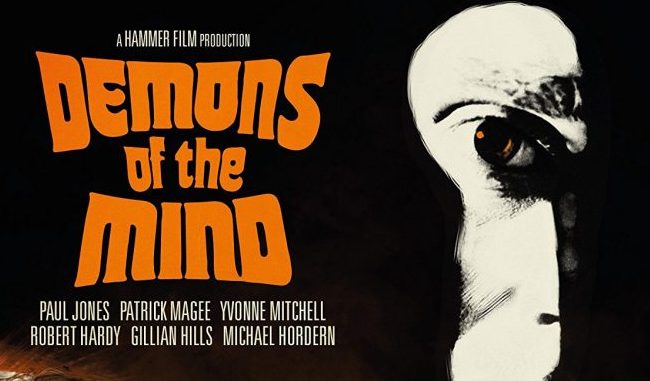 Last week BFI published an article on the 10 most overlooked horror films from the 1970s. Demons of the Mind (1972) was one of those films and it is one of the more overlooked and neglected films in Hammer’s canon of horror films. In many senses it is a typical Hammer film with its 19th century gothic settings and peopled with torch bearing peasants and murdered bare breasted maidens. But in other senses it is also very untypical Hammer in its story, subject matter and the focus on psychology rather than horror.

For much of the film it is unclear as to what is going on. Much of that confusion is both deliberate as well as due to the changes made from its original source screenplay. There was in the original draft screenplay (originally titled ‘Blood Will Have Blood’) the suggestion of lycanthropy in the family, which would have made this Hammer’s second werewolf movie. Little of that remains in the completed film, other than a suggestion buried in a monologue by the main unwitting villain, Baron Zorn (Robert Hardy).

A couple of incidents happen at the beginning of the film with the murder of a peasant girl by an unseen assailant who is then covered in rose petals in the forest and the re-capture of a frightened runaway girl who is picked up by a bald headed man-servant. The girl is Elizabeth (Gillian Hills) who is taken by carriage back to her large gothic home by the man and her maid (Yvonne Mitchell). It soon transpires that both Elizabeth and her equally pale and seemingly disturbed brother, Emil (Shane Briant) are kept locked up apparently for their own good by their father, Baron Zorn. There is also more than a hint of them having an incestuous relationship with each other. Other events also descend on the home of Zorn with the arrival of a quack Dr. Falkenberg (the wonderfully hammy Patrick Magee) and a young fellow traveller (yet another handsome blonde Hammer hero, this time played by a former member of Manfred Mann, Paul Jones). Falkenberg has arrived at Zorn’s home to try some pre-Freudian psychoanalysis to help Zorn and his mentally sick family. There is also an idiot savant priest (Michael Horden) going round the countryside speaking of evil.

EMI, distributors for Hammer since 1970, did not know what to do with this film. They were so disturbed by it they, unusually, didn’t even release it as a double bill with another Hammer film but instead released with another B movie, Tower of Evil (1971). It confused and confounded the critics on its release and deals with some sick minds and contains some rather sadistic violence, taking advantage of its ‘X’ certificate. As a result the film remained a minor Hammer effort but over the past few years it has been rightly re-evaluated. True, the acting is not the best: Patrick Magee and Hardy are doing their usual scenery chewing performances. Meanwhile, the female cast members are somewhat better. There is Gillian Hills as the young innocent of edgy sister (who replaced a miscast Marianne Faithfull tipped for the role) and Viginia Wetherall as the peasant girl as a stand in to Hill’s Elizabeth by the mad doctor – both of whom had recently appeared in Stanley Kubrick’s A Clockwork Orange the previous year. Newcomer and soon-to-be Hammer regular Shane Briant also stands out with his blonde hair, pale skin and orange shirt as the crazy son, Emil. The style of direction by young director Peter Sykes, a director who had an indistinguished career, although he did direct To the Devil a Daughter (1976) for Hammer, a film also released in this round of Hammer releases by Studiocanal.

What the film does benefit from, however, as opposed to the dreadful sets and scenery paintings in Scars of Dracula (1970) is some interesting location shooting. The house used in the film is an effective setting in Wykehurst Park in Warwickshire but does look more like a French chateau or folly than a Bavarian pile. Nor do the Borehamwood forests look much like Bavaria. Never the less it is marked improvement from the sets from Hammer Films in 1970.

Demons of the Mind feels rather sadistic and, with Christopher Wicking’s script does feel a little confused but is a more than interesting addition to the studio’s films. As with all the other Studiocanal releases the transfer looks good and there is nice featurette on the film featuring such eminent horror film writers as Alan Barnes, co-author of ‘The Hammer Story’ and Jonathan Rigby.