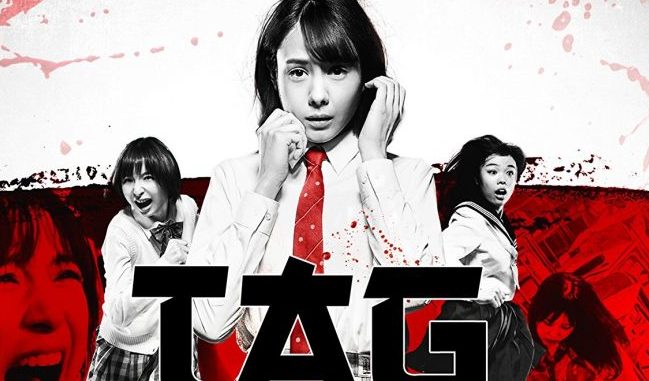 Released for the first time in the UK, Tag (2015) is the latest release from Sion Sono, a director not to shy away from controversial films given that some of his previous titles have included Suicide Club (2001) and the very violent and stylised Tokyo Tribe (2014). Tag starts impressively and with some promise. It is almost a dreamlike idyll on a nice sunny day. We see two coaches full of female students in matching uniforms wearing tartan mini-skirts and white blouses. The teacher even comments to the driver what a lovely day it is. The gentle music also gives the impression that this gentle idyll will be disrupted. The main protagonist, Mitsuko (Reina Triendl) bends down having dropped the pen she was using to write in her diary. All of sudden an unseen force slices both coaches in half from front to back, including every student except Mitsuko as she was kneeling on the floor to pick up her pen. In shock, Mitsuko becomes spattered with blood from her fellow students as we see their neatly severed torsos. She escapes from the coach and is still chased by the wind, just missing each time it makes a pass.

Mitsuko makes her way to a stream to clean herself. When she arrives at her school she is pale with shock with all her friends, some she thought dead there. She tells them about her bad dream and they laugh at her. During recess they go to the lake where one of her friends talks of an alternate world and alternate realities. Suddenely she is attacked by a giant crocodile. Or is she? Back at school teachers suddenely go bat shit crazy with machine-guns. And so it goes on.

The film is sharply transfered on this Eureka! release and is beautifully shot with a great deal of digital filming made using cameras on drones to give aerial sweeps. However, it never really fulfills the promise of its opening scene and is let down by some obvious CGI that is in most parts totally unconvincing. Yet, in terms of imagination, Sono is a direct descendant of the likes of Takashi Miike in his shock tactics and in many ways more inventive, although Tag is a remake of another Japanese film, The Chasing World made in 2008.

Someway into the film we begin to understand not only is the film centered around Mitsuko as a story but also as the story within a story. Without giving too much away, this might not make a lot of sense unless the film is viewed but the film does seem to make some feminist statements about image in this otherwise gory fantasy horror with an almost Bunuelian wedding scene with elements similar to the church massacre scene in Kingsman: The Secret Service (2014) thrown in for good measure. Bizarre and odd, although it still outstays its welcome.

There are no extras other than a trailer.