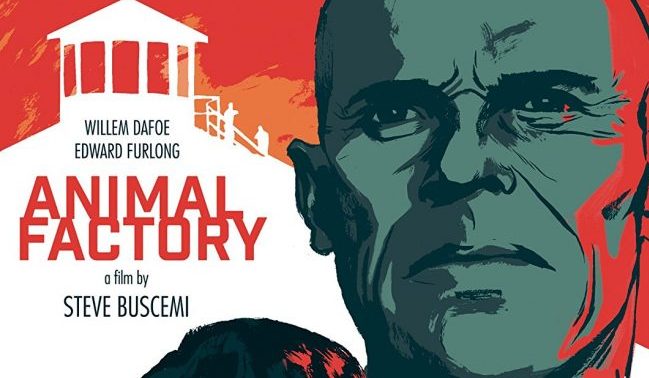 Animal Factory (2000) was written by Eddie Bunker. Who, I here you reply? You know, Mr. Blue from Quentin Tarantino’s Reservoir Dogs (1991). Eddie (or Edward) Bunker was a larger than life figure who, certainly towards the end of his career did a great job in propagating his own myth and Animal Factory, adapted from Bunker’s own 1977 novel of the same name tells a tale of survival in a tough prison, with some of the aspects of the book/film adapted from Eddie’s own life.

Born into an alcoholic theatrical family, Bunker went from foster homes to hobo and falling into a life of crime, inevitably ending up in prison. He was in and out of institutions for years before eventually ending up at the notorious prison at San Quentin where he had the dubious honour of being the youngest inmate. And so it went for the next 30 years or so. While in prison he learnt to read and write vorasciously and while his style may not have exactly been Faulkner it was certainly colourful.

His first novel, ‘Straight Time’ was adapted into a film in 1978 and starred Dustin Hoffman as a newly released prisoner released into society and the control of a parole officer (M. Emmet Walsh) and struggles to adapt. ‘Animal Factory’ was his second novel and between them this set Bunker on the straight and narrow and as something of a minor celebrity figure in Hollywood where he began acting and appearing in such films as Runaway Train (1985) (for which he was also co-scriptwriter), The Running Man (1987), Tango and Cash (1989) and of course Reservoir Dogs.

Animal Factory is set entirely within a maximum security prison and deals with the relationships of the inmates within. The main focus is on the young felon, Ron Decker (Edward Furlong) and his relationship with an older lag, Earl Copen (Willem Dafoe). Earl is a sort of trustee who is friends with one of the guard officers (Seymour Cassel) and writes for the prison newspaper. He takes young Decker under his wing and draws him into his gang. Decker needs this as his boyish and youthful looks make him attractive to predatory homosexual inmates; he shares a cell with the talkative draggy and camp tore up from the floor up ‘actress’ (played by Mickey Rourke, who is clearly having fun with his role). Eventually, through Earl’s help Decker gets better jobs in the prison, but fails to get parole after he stabs an inmate who attempts to rape him. He fails his parole,  making him angry. After both men endure a stretch in harsh solitary they vow to escape.

Clearly Bunker has brought some of his experiences to writing the book and film. The characters are given greater nuances by the films director and co-actor, Steve Buscemi. Of course both had appeared together in Reservoir Dogs. This was Buscemi’s second of four films to date as director. Previously he had directed the wonderful small town drama, Small Change (1996) and has shown some talent as an indie director. The cast is also good, as well as a cameo by Buscemi as a member of the probation board also includes John Heard as Furlong’s father, Danny Trejo as one the gang member’s and of course Bunker himself who appears as one of the older lags.

It is unfortuntate the film has both been given little attention or publicity, so it is great that Arrow Video has re-addressed that balance and given the opportunity to have a fresh reassessment. The one extra on the disc is by Guardian crime writer, Barry Forshaw who takes a fascinating look at the life and career of Eddie Bunker. There is also a commentary track by the late Bunker and co-star Trejo.