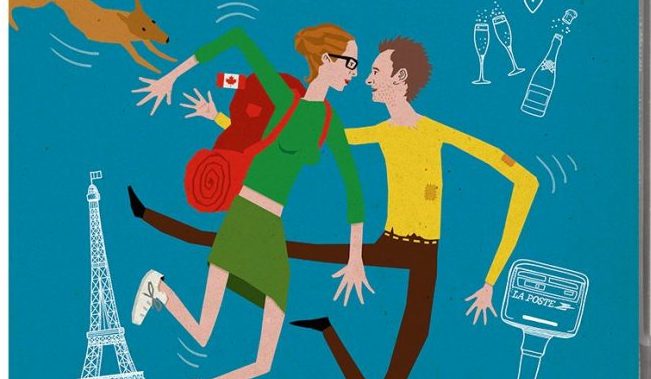 Lost in Paris (2016) is the 4th feature collaboration between kooky real life husband and wife duo Fiona Gordon and Dominique Abel who starred, directed, produced and wrote this light Franco-Belgian comedy. The film opens in a rather cartoonish snowbound Canada where Fiona receives letters from her Aunt Martha (veteran French actress Emmanelle Riva) to come over to Paris before people put her in a home. Fiona sees this as a golden opportunity to visit the great city and visit her aunt. Wide eyed Fiona arrives in Paris and immediately finds that her lack of French, despite speaking some, leads to a comedy of errors. Fiona arrives at Aunt Martha’s to find no one here. Led to believe that she is missing, Fiona takes a walk down to the River Seine where she first catches sight of the Eifel Tower. While having her picture taken on a bridge, wearing her huge red rucksack, Fiona leans back and falls into the river and sinks to the bottom before ditching her rucksack at the bottom ]she is saved, albeit bedraggled by a passing bateaux mouche. Her belongings are retrieved from the river by Dom, a scatty bum. Fiona still cannot find her aunt and as chance would have it Dom and Fiona’s paths cross as she goes in search of her aunt.

The ditzy and whimsical visual comedy of Lost in Paris only goes so far. Many have branded the pair’s brand of comedy to be similar to that of Jacques Tati, but lacks Tati’s subtelty, restraint and construction. Amelie (2002) is another film it has had parallels drawn with but also lacks that films huge style. The comedy is mostly visual and is deliberately old fashioned, of the Charlie Chaplin, burlesque comedy variety. Fiona particularly is kooky looking and her and the French non-English speakers trying to understand each other grows wearisome, while some of the visual gags are equally irritating, especially the split screen with both Dom and Fiona fantasising about each other while lying in bed. Never the less, they are a couple keeping the tradition of silent comedy alive and while this might not be for all tastes, this is to be admired, though in France this type of comedy has always been more popular.

Veteran Riva is a treat to watch in what would be a poignant role. Riva, who had appeared in many French classics also enjoyed a late career including in Michael Haneke’s moving Amour (2012) about Alzheimer’s disease, but sadly she died not long after the Lost in Paris was completed and two months before its French release.

Many of the locations in the film are shot in and around the centre of Paris and around the River Seine with a key scene supposed to be in Père Lachaise cemetery (but was actually shot at the Cemetery in Passy). One of the films best  scenes are some dizzying beautifully shot scenes on the Eifel Tower. The Statue of Liberty further down the Seine at Île aux Cygnes also features. Some of the blacker gags misfire, but the film will most certainly have its audience

Extras on the disc include an interesting study on the couple and how they fit and re-ignite a tradition in burlesque or silent comedy and some of the films that this one references. There is also one of the couple’s earlier short films, Walk on the Wild Side (2000) included here.