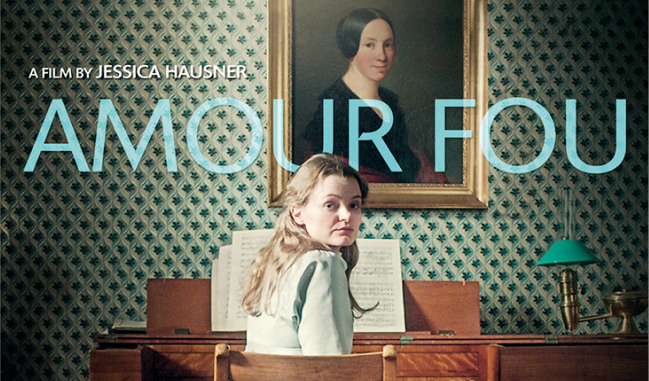 A film about a young man’s obsession with finding someone to share a double suicide (well everyone should have a hobby). Amour Fou (2014) is set in 1811 during the Romantic era. Suicide was it seemed very fashionable during the Romantic period, probably starting in Germany with the novella, ‘The Sorrows of Young Werther’ by Johann Wolfgang von Goethe in which a romanically in love Werther commits suicide over his love for an unrequited love. The novella turned Goethe into the biggest and most influential writer of his generation, while the clothes of the young romantic hero of the story (modelled off the writer himself) also became fashionable. A writer, poet and dramatist who followed in the footsteps of Goethe was Heinrich von Kleist who killed himself in a similar manner to Werther with a bullet to the head at the age of 35 along with his mistrss, Marguerite Vogel.

According to an interview with Viennese director on the disc, Jessica Hausner, she was fascinated by the macabre idea of wanting to commit suicide which to her was a contradiction to love and wanting to be with your loved one. The film opens in possibly about 1809 0r 1810 near Berlin and for the most part the film is a salon drama where von Kleist feels like an outsider in social circles (ably played by von Kleist look-alike Christian Friedel who perfectly plays it as a somwhat toady character). He first approaches Marie (Sandra Hüller), his cousin who he first asks to die with him in a suicide pact, but she politely declines. He then moves onto a woman named Marguerite Vogel (Birte Schnöink) who is married to a bourgeois. He, however, seems somewhat coldly indifferent to his wife and pushes her onto Kleist, feeling unthreatened, but aware of Kleist’s desire for suicide. Margueritte tells von Kleist that she has a tumour and will soon die, but Heinrich is initially not convinced that Margueritte is his ideal candidate but never the less goes ahead with the act.

Hausner’s film gives a atrong sense of time and place. Not content with just focusing on romantic suicides but there are also discussions on current political situations and Prussianism. Haunser’s camera (shot by her regular DoP, Martin Gschlacht) barely moves, perfectly framing each shot; at times the picture almost seems paused with hardly anyone moving within the frame. The sparse interiors also recall some of the lesser known German romantic paintings of the likes of George Friedrich Kersting or are framed like a Veermer interior; there appears to be something very two dimensional and flat about these intereriors with a touch of the unheimlich about them adding to the overall strangness of the film. Layered to this there is also a sense that Hausner is poking fun at von Kleist’s ridiculous search for suicide in his enuii.

Released by Arrow Academy and presented in High Definition (1080p) on Blu-ray, the image is incredibly sharp that in itself will draw the viewer in with each pattern of wallpaper, twig of a tree or bouffant presented with absolute clarity. Extras on the disc include some deleted scenes that would slow the film down further (including von Kleist by a lake reciting one of his poems), an interview with Hausner and one of her early short films, Oida.