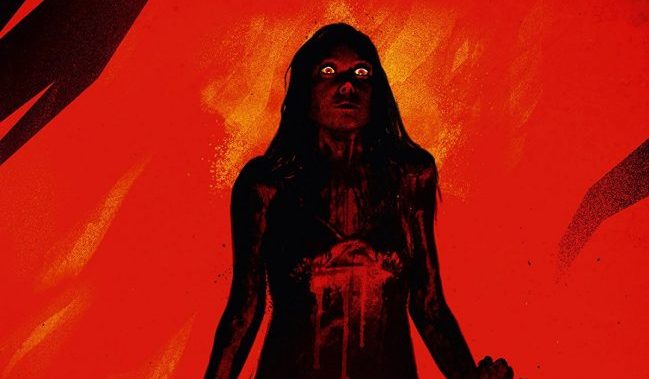 Another coup from Arrow Video, available as a Blu-ray limited edition is the new release of one of the great cult horror films of the 1970s, Carrie (1976). This can only be described as the most definitive release of the film as a package with tons of documentaries and interviews. On its release the film was not only a success both critically and at the box-office, but also became an instant cult hit. Inevitably it inspired many copy-cat films and made that prolific horror and fantasy writer Stephen King a household name. Looking at it today there are elements of the film that works well and other parts which look distinctly dated. Never the less in the 4K transfer it is very impressive to look at and can be seen in a whole new light.

The film opens with an average Anywhere American high school (it was in fact filmed in Pacific Palisades High School as well as other Californian locations) a group of 16-year-old girls are playing volleyball, but when a ball is thrown to Carrie White (Sissy Spacek) she bungles the block and is derided by all her fellow students. The credits then open with a haunting and melancholic soundtrack by regular horror and De Palma regular Pino Donaggio (he had previously provided the score for Nicholas Roeg’s Don’t Look Now, 1973) with some slow motion photography in the girl’s locker room. As the girls lather up in the shower, goof around and get dressed, Carrie White is alone in the shower when blood pours down her legs. Carrie is having her first period and her horror at what is going on is received with derision and laughs from her fellow students (she is clearly quite late in having her first period). Cornered in the shower with bullying classmates throwing tampaxs they shout at her in unison “plug it up! Plug it up!” Carrie is saved by the sports teacher, Miss Collins (Betty Buckley). The ringleaders of the bullies are put in detention, with the most rebellious, Chris (De Palma muse, Nancy Allen in her first major role) literally fighting with Miss Collins and getting herself into deeper trouble.

Meanwhile, there are signs that now Carrie has come of age and has powers she never knew she had. In the headmistress’s office she loses her temper in frustration and causes and ash tray to flip, while on the way home, a young boy on his bike mocks; she causes him to fall off. But it is when she gets back home and faces her religious nut of a mother (Piper Laurie) that we see why Carrie White is the way she is. When Carrie cries to her mother about she didn’t tell her about her body would change and periods, the mother locks Carrie in her usual understair cupboard for menstration being caused by “sinful thoughts”. One of Carrie’s classmates, Sue (Amy Irving, the future Mrs. Steven Spielberg) looks the most innocent and feels guilty. In what initially seems like a set-up Sue encourages her boyfriend (William Katt), the handsom sports star to take Carrie to the high school prom which she reluctantly agrees to. Of course Carrie is in a whirl over this, setting her mother into a new level of crazy. This leads to the infamous scene with the pigs blood poured over Carrie on stage when she is crowned queen of the prom, humiliating her in the process and setting off her dreadful telekenetic abilities to avenge herself against the bullies.

Carrie was very much a benchmark horror film in the 1970s. Yet despite the story much of it is less about the telekenetic abilities of the protagonist and more about an individual who is alienated by society because of her messed up upbringing. The most terrifying scenes are not the telekentic scenes but the interaction between her and her crazy religious fanatic mother in their dark gothic suburban house filled with eerie religious symbols. The bullying too is still quite shocking. This is also a very well cast film with Spacek unforgettable in the lead role. According to extras on the disc Spacek says that she deliberately made herself look plain and put vaseline in her hair to look greasy and is so convincing in her role. Elsewhere of course there is a young John Travolta as Nancy Allen’s boyfriend, while Laurie is outstanding as Carrie’s fanatic mother who is shockingly believable.

Not only is this one of the key horror films of the decade but was also a benchmark film for Alfred Hitchcock fan Brian De Palma. Previously De Palma had made such thrillers as Sisters (1973), Obsession (1975) and contemporary the ‘Phantom of the Opera’ musical, Phantom of the Paradise (1974), but Carrie was the real breakthrough movie for De Palma. Incidentally one of the slightly cringy Hitchcock’s references in the film is the pizicatto string sounds from Psycho when Carrie uses her telekenetic powers. Never the less Carrie is a smart multi-layered film that works so well that of course also has a classic and unforgettable ending. Films such as Firestarter (1984), also adapted from a very similar Stephen King story is a pale shadow of Carrie as were many other films that followed such as The Medusa Touch, The Fury and Patrick (all 1978), but Carrie has many other elements going on within the film that the other films just don’t live up to. The Arrow Video release is filled with some excellent featurettes, old and new featruring interviews with most of the cast and crew (except Travolta). The best featurette is a 2001 documentary on the making of the film.