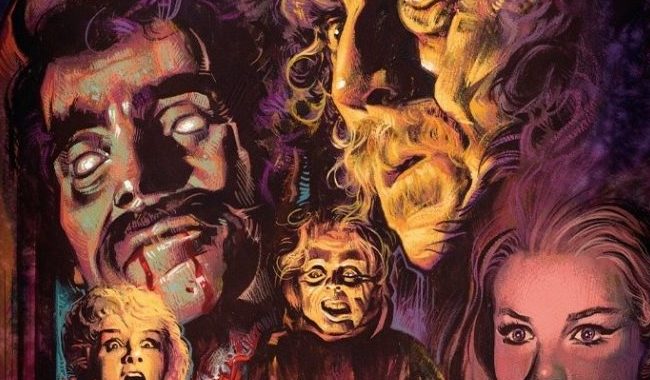 Growing up, the availability of European horror classics such as those directed by Mario Bava as well as the film directors influenced by Bava, including Dario Argento and Lucio Fulci, were rare. Images in horror books would show the classic still or studio shot from Black Sabbath (1963) of a wiry white haired Boris Karloff in Russian/Eastern European dress holding a severed head. Even with the advent of VHS (and Betamax) these films were rarely available. Thanks to companies such as Arrow Video as well as the ability to purchase DVDs and Blu-rays with subtitled options these films have become much more widely available. The big advantage of this is the popularity of filmmakers as Mario Bava has increased exponentially.

Black Sabbath was Bava’s second horror film, or 3rd if you include the early giallo thriller, The Girl Who Knew Too Much (also 1963 and sometimes known as Evil Eye). This followed from his first solo effort as a director, The Mask of the Demon/Black Sunday (1960), an atmospheric and ground breaking horror tales.  Black Sabbath also prefigures the portmanteau horror films from Amicus with its three story horror stories. One of the differences, other than an introduction by Karloff is that there is no story link between the three tales. Depending whether you are watching the American or Italian release, the order of the stories changes. The Italian order is: ‘The Telephone’, ‘The Wurdalak’ and the chilling, ‘The Drop of Water’. By contrast the US version follows thus: ‘The Drop of Water’, ‘The Telephone’ and ‘The Wurdalak’. The opening story in the Italian version, ‘The Telephone’ is an early giallo about a former call girl (Michèle Mercier) who arrives home when she receives a chilling phone call telling her that she is going to be murdered in her home. Naturally paranoia and fear take over as she believes that the stalking potential killer and tormentor is an dead ex-partner and former pimp.

The supernatural element heightens further in the stylishly atmospheric period piece, ‘The Wurdalak’, a haunting vampire tale from Russia (a Wurdalak is a Russian vampire in folklore). The story follows the legends quite closely. A rider (Mark Damon) in the mist comes across a headless corpse with a blade in his back. When he comes across a cottage he discovers the knife belongs to the father of the owners who has been missing for several days. The father, Gorka (Boris Karloff) returns and is suspected of becoming a vampire.

The final story is a genuinly unsettling ghost story about a nurse who has been called to a stately home to dress the stiff dead corpse of a medium. While doing so she steals the corpse’s ring and is subsequently haunted by the dead woman looking at her and the haunting sound of dripping water.

The order of the film is not the only difference between the Italian and American edits of the film. Of course the Italian version dubs Karloff’s voice, but many of the shots differ and the have a completely different music score and use of sound effects. One of the problems that faces viewers of international films is original version or the dubbed English one? The extra on the disc is a 30 minute documentary highlighting in split screen the differences in both soundtrack and visuals the difference between the two films. On viewing this the Italian cut is definately the best version with a less intrusice score and a better use of sound effects.

This is a very stylish horror film that for the first time would highlight the rich use of colour Bava would employ in his films. Also, unlike Hammer films and other gothic horrors made in the UK and USA it would use external locations better and is shot with more interesting cinematography making good use of mist effects (one scene in ‘The Wurdalak’ we see a rider ride into a wood while long shadows of the trees are cast over the morning snow). Over recent years releases such as this by Arrow redresses the balance of Bava’s legacy as a big influence on horror cinema.