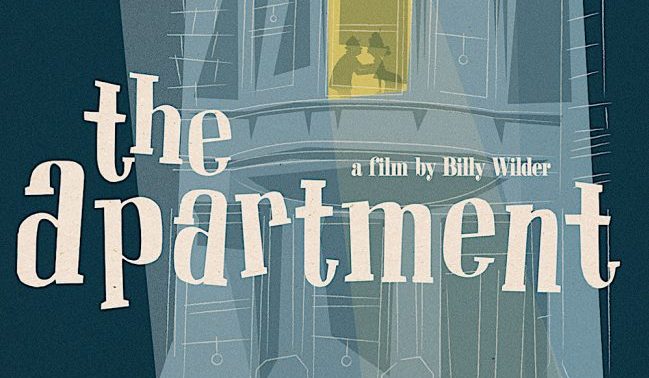 The term ‘Master’ levelled at filmmakers is often overused, but in Billy Wilder’s case, like Stanley Kubrick, whatever genre or type of film he made became gold. But Wilder was more than a director; he also wrote most of his films alongside his long time partner in crime and collaborator, I.A.L. Diamond who, also co-wrote The Apartment (1960) with Wilder. A good comparison or counter punch to The Apartment is another film by Wilder, a film that is not often directly cited as a comparison – The Seven Year Itch (1957). In that film a nobody of an advertising exec. (Tom Ewell) decides to take advantage of his wife being away and invites a ‘dumb’ blonde (Marilyn Monroe) over in the hope of getting his wicked way with her. But in the end guilt takes over and no impropriety takes place.

Released complete with many extrsas, The Apartment is somewhat darker with urban and capitalist alienation, loneliness, prostitution and pimping, suicide and capitalist exploitation as its themes. It is often spoken of as a comedy, but as already established it is very dark in its themes and tones, despite many lines and situations of dark humour. Diamond and Wilder along with many other collaborators on the film, including the composer, cinematographer and set designer all bought a very European sensibility to this Hollywood production as Ernst Lubitsch had done years before. The story opens with a narration by the main character, an everyday office schlub, C.C. Baxter (Jack Lemmon) who recognises he is on the work treadmill and uses his wily methods to climb in the company from the enormous alienation of the open plan rows of desks to his own office on a higher floor in his Manhattan office block. He gives the key to his apartment to his bosses in order that they can entertain ladies. Of course the bosses are exploitating him as well as the women they get drunk and have their wicked way with. These men are all pretty awful and given the recent spotlight on Harvey Weinstein, this kind of power over women looks even more distasteful. The poor schlub ends up waiting in the cold weather while these men finish entertaining and fob him off with endless promises of promotion, while his neighbours think he is some kind of Casanova.

Clearly C.C., or Buddy as he is known is a nice guy and is friendly to the elevator girl in the building he works, Miss Fran Kubelick (Shirley MacLaine). Unbeknownst to him she has also been dating the Personnel Director (what would be called the HR Director these days), J.D. Sheldrake (Fred MacMurray). Sheldrake learns of Buddy’s apartment and uses his influence and more offers of promotion to take Fran to his apartment. We learn that Fran had already been rejected by the married Sheldrake but is continuing to keep her dangling. It is now Christmas Eve and Sheldrake walks out on Fran to return to his family. Still in Baxter’s apartment Fran takes an overdose of pills where she is discovered by Baxter when he returns. Naturally, he takes the blame for the suicide attempt, both from the neighbouring doctor who helps and later Fran’s cabbie brother-in-law to save her face and loyalty to his boss.

There is something very callous, and of course misogynistic about how all these bosses treat women in the film. With a modern eye it looks all the worse than it would have even done so to a contemporary audience. As critic Philip Kemp says on the commentary “the balance between comedy and tragedy is on a knife edge”. All this makes The Apartment grow in its status as a classic.

Wilder, Lemmon and MacLaine were regulars for Wilder and all worked really well together, with Lemmon appearing in 7 Billy Wilder films (The Apartment was the 2nd) in total. Appropriate then that there are a couple of extra featurettes on the film focusing on that partnership. There are documentaries galore on the disc, including an introduction and commentary by Philip Kemp, an excellent essay by David Cairns, an interview with Hope Holiday who plays an equally lonely Christmas Eve pick-up for Lemmon and an interview with Wilder among others. A classic through and through.