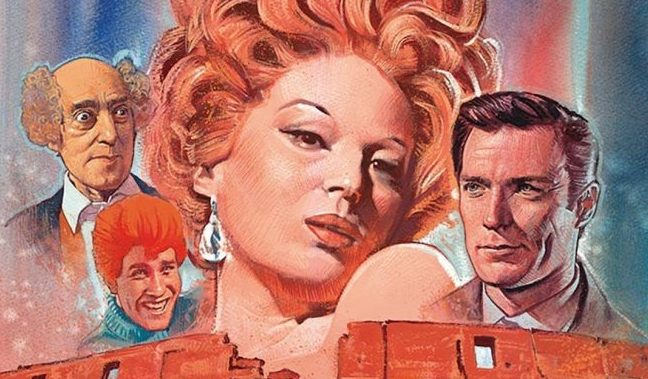 La Streghe (The Witches) (1967) has always been an elusive film for film buffs, mostly because of it co-starring Clint Eastwood in an Italian film. But focusing solely on this would take away the other talents on display in this anthology film. The origins stem from the films producer, international mega-producer Dino de Laurentis who gathered five directors and writers together with the remit that they write a series of stories centered on the theme of witches and were all to star Silvana Mangano. Mangano was de Laurentis’s wife and he wanted to make this film to boost her flagging career. The directors of the each film are as follows: Luchino Visconti, Mauro Bolognino, Pier Paolo Pasolini, Franco Rossi and Vittorio de Sica. It is clear from each different story that each director had very individual ideas.

The opening credits are a lengthy, crazy psychedelic collage of images with a score by prolific Italian composer Ennio Morricone, similar the credits to those in such big budget international films as Those Magnificent Men in Their Flying Machines (1965) or Casino Royale (1967). The first short story, directed by the great Luchino Visconti is ‘The Witch Burned Alive’ which opens in Kitzbühel with the arrival of an elegant famous Italian actress, Gloria (Mangano) to a snowy winter Alpine chalet where she is greeted by the other guests. When the glamorous actress gets drunk at a party presented in her honour, some of the guests ‘unmask’ her by taking off her false eyelashes and make-up, highlighting her imperfections in order to see if she is really beautiful. The film co-stars French actress Annie Giradot and the director’s younger lover, Helmut Berger.

The next film, ‘A Civic Sense’ is somewhat shorter. It stars popular 1960s Italian actor, Alberto Sordi who is hurt in a traffic accident. He is put into the car by a bourgeois woman (Mangano) who initially seems to be whisking him off to hospital and is dangerously driving only to be using the injured man to get to where she needs to go. The film was directed by the least well known of the directors, Mauro Bolognino, many of his best known films written by Pasolini.

The third and middle film, ‘The Earth As Seen From the Moon’ is the oddest and most absurd of all the films here. Directed by arthouse director Pier Paolo Pasolini, this is a very different film by his standards. It is a bizarre comedy starring Italian comic actor Toto (who the previous year had starred in Pasolini’s Hawks and Sparrows, 1966). Toto plays a curly red haired looking clown with a bald head who is mourning the death of his wife. He and his son, with equally absurd red hair plan to get a new woman for Toto. The son is played by Ninetto Davoli, a regular of Pasolini’s as well as his lover. The pair eventually find the woman they are looking for in the mysterious and silent Mangano. This is the oddest of all the stories and very atypical film for the director. It is one of the longest, least interesting and absurd to the point of boring of any of the stories.

By contrast the next film, directed by Franco Rossi is the shortest of the films. Called ‘The Sicilian’s Wife’, it is the story of vendetta in a peasant community. But it is the final story, ‘An Evening Like the Others’ that has garnered the most interest, mostly because it stars Clint Eastwood with Mangano as a bored married couple. The wife, Giovanna fantasises that her husband (Eastwood) still feels the same about her. Each evening he comes home from work tired and puts his feet up on the sofa, while she imagines either slapping him, shooting him or them making love. He, meanwhile, can’t see any problems.

In the end the film did little for Mangano’s career, it’s original intention to promote her career, even to a domestic market as it only ever really played in Italy. For all involved it is one of their least films; even for Eastwood and remains something of a curio, if an interesting one. There are very few extras on the disc other than the Italian language version and the slightly shorter English language cut. For the most part it is recommended to watch the Italian version and the English one for the final story, the one with Eastwood, as Mangano also speaks in English in this one.