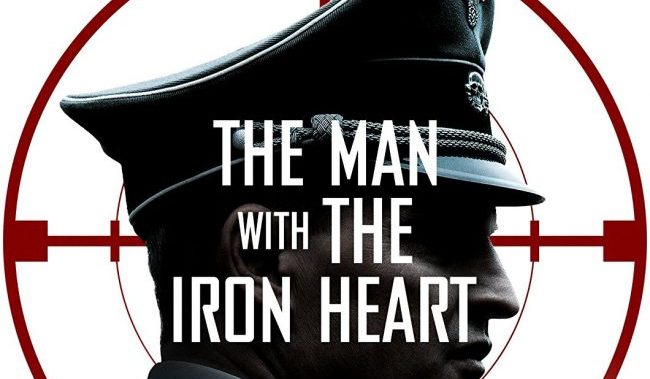 “A man with an iron heart” is how Adolf Hitler described Reinhard Heydrich. This he meant as a compliment as Heydrich was one of Hitler’s most ardent followers and carried out his brutal vision of tyranny under the stewardship of Heinrich Himmler, the Head of the SS. Heydrich’s name was also leant to the operation that was to be the Final Solution to Europe’s Jewish population which became known as Operation Reinhard.

The Man with the Iron Heart (2017) is the second film in a year that dealt with the story of Heydrich and how his brutality and arrogance led to his assassination by British trained Czech commandoes in Prague. That other more widely distributed film was Anthropoid and starred Cillian Murphy and Toby Jones. While Anthropoid clearly had better production values and a bigger budget, The Man with the Iron Heart focuses more on the life of Heydrich and the first third of the film is a biography. Well, up to a point. Based on the book, ‘HHhH’ written by Laurent Binet, the film opens with Reinhard Heydrich’s (played by Australian actor Jason Clarke) dismissal from the navy in 1929 following an affair with the wife of another navy officer to meeting his wife, Lina (Rosamund Pike). Lina was the person who led H. to becoming a committed Nazi. When the war starts proper in September 1939 with the invasion of Poland, Reinhard Heydrich cuts his teeth as a ruthless sadist where he organises the SS killing squads in the occupied East. After Heydrich’s assassination in May 1942 the film shifts focus and moves back 6 months to the two lead paratroopers, Jan Kubiš and Jozef Gabčik parachuting into Prague. From here on in there is little site of Heydrich. From Prague, the pair work with the partisans and eventually assassinate the SS overlord, before he eventually dies in hospital. This led to a ruthless clampdown by the occupying Nazis and ultimately the destruction of the village of Lidice and its inhabitants.

This was not the first film to interpret this story. The first was Operation Daybreak from 1975 which starred Timothy Bottoms and everyone’s favourite Nazi, Anton Diffring as Heydrich. As early as 1943 Fritz Lang’s Hangmen Also Die used the story but changed the names. There is an issue of factual errors with the film and much artistic license. While the facts are generally followed it lacks the character development of the resistance in Anthropoid, as well as the strong sense of place in that film, this film’s lower budget is very much evident. In addition, Clarke is a very unconvincing Heydrich. There has never been an accurate portrayal of Reinhard Heydrich, but Clarke is at least a better casting than Kenneth Branagh in Conspiracy (2001).

Elsewhere, the location of the Wannsee Conspiracy has turned from a fancy but small villa to a palace while, unlike in Anthropoid, Prague is indistinguishable from any other Central European city and the horrific murders carried out by the Einsatzgruppen, the SS death squads that followed behind the Wehrmacht in the invasion of Eastern Europe and organised by Heydrich, while horrific, does not show the scale of the millions plus murdered in this manner. Never the less these scenes are fairly effective, although other critics have criticised the shot between this which cuts to his lonely and upset wife crying in the bath and a brothel. Heydrich used a brothel, known as Salon Kitty to spy on members of the army command to blackmail them.

Never the less, Rosamund Pike who plays Lina Heydrich, the woman who politically inspired her husband shows the same cold ruthlessness she displayed in Gone Girl (2014) while the resistors are indistinguishable, unlike in both Operation Daybreak and Anthropoid. The film is directed by Cédric Jimenez, a director who previously directed the 1970s set French crime film, The Connection (2014), the real-life story itself which became the basis for The French Connection (1971). In The Connection, Jiminez did a good job in showing a 1970s Marseilles but with The Man with the Iron Heart, its limited budget doesn’t quite capture 1930s Germany and feels at times a little episodic.