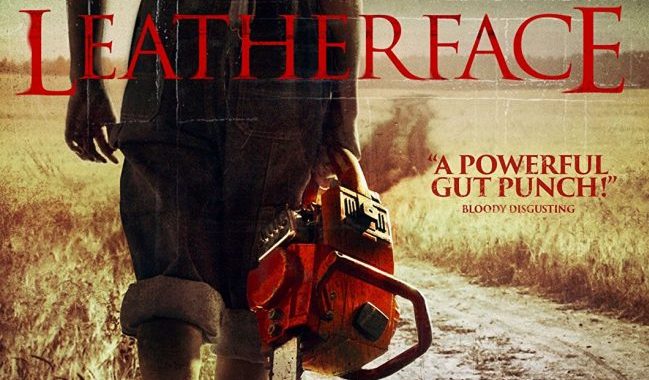 It would seem that there is still an appetite for the Texas Chainsaw Massacre franchise with the new release Leatherface (2017) coming out on DVD. This is the 8th such film in the series. Yet each release only highlights how, as a stand alone film the original 1974 film by Tobe Hooper was. It was an original piece of American Gothic which took its inspiration from the notorious serial killer Ed Gein with its flat wheat fields, derelict and spooky farmhouses, red necks and rusting farm equipment.

The conceit of Leatherface is that this takes us back to the origins of the character of Leatherface, the iconic chainsaw wielding character with the leather mask covering his face. But was this not done before in The Texas Chainsaw Massacre: The Beginning (2006)? Well, at least at the beginning of the film. In Beginning, Leatherface is born on the farm in a pig sty and is brought up by his cannibal family before the plot leads forwards to the Hewitt family massacring passing youths (and repeating the story of the original pretty much from this point). Leatherface starts in 1955 and shows how Ma Sawyer (Lili Taylor) wants to make her youngest, Jed Sawyer into a man on his birthday as a young boy by giving him a chainsaw for his birthday and encouraging him to cut open a male victim as an initiation into this deeply disturbed rural red neck family. He is reluctant to do so. Later Jed is seen at a roadside, stopping a passing pick-up truck with a pigs head on his own head. A girl gets out believeing him to be wounded and tries to pursue him. When she ends up at the Sawyer farm and becomes the family’s next victim. The problem is the murdered girl is the daughter to a local sheriff (Stephen Dorff), who ensures that the young boy is incarcerated in a mental institution.

10 years later and a young nurse, Liz White (Vanessa Grasse) begins working at this cruel and harsh mental institution where she sees good in the now grown Jed (Sam Strike). Eventually Jed and some of the more psychotic patients at the institute riot and in a blood frenzy murdering their tormentors make their escape with Liz as their hostage. On the road, with Liz as their witness, the group continue a series of murders and blood rage with Jed heading on his way as a conversion to becoming Leatherface.

Part of the smartness of the original The Texas Chainsaw Massacre was that the family was mysterious, that Leatherface particularly was an enigmatic and mysterious figure. By de-mystifying much of the terror of the original character reduces this. Never the less, where the film is smart is with the characters from the asylum who go on the road with their kidnapped nurse Liz. These are complex people, including the overweight Bud (Sam Coleman) and the worst of them all, necrophile Clarice (Jessica Madsen). What is also interesting, although this is an American film, is that most of the cast, except the two older members, Taylor and Dorff, are British and the film was shot in Bulgaria rather than Mid-West America. These would, in all likelihood be for budget reasons. Never the less the enduring success of the Texas Chainsaw Massacre franchise shows that there is still a desire for these films, even if they’re not a patch on Tobe Hooper’s original, so long as they don’t take the absurd direction of the Friday the Thirteenth franchise. What is also clear in Leatherface, directed by two newcomer French directors who’ve made a number of horror shorts, Alexandre Bustillo and Julien Maury, Leatherface is incredibly gory and shows the lengths the films need to go to draw in an audience.

Extras on the disc include about 6 deleted scenes and an interesting Making Of documentary.