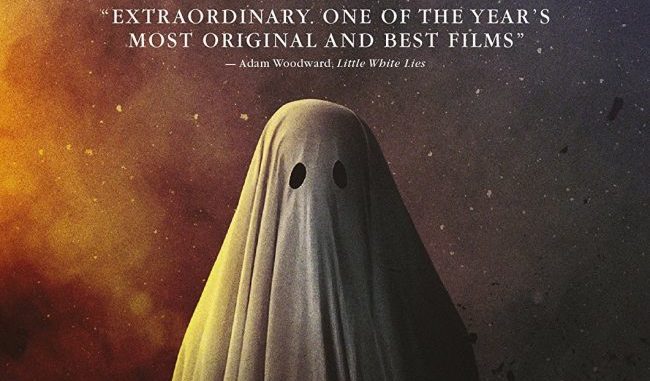 A Ghost Story (2017) is by no means a normal ghost story. Nor is it in the strictest sense of the word a horror film. It even has the audacity to have as it’s ghost a human shape with a white bedsheet over it with cutaway eyes. Of course this could easily have gone very wrong and could frankly have made the film appear very silly. Ghosts with sheets over their heads and eyes cut out of the sockets is something a child would draw or is the first cliche we think of if someone were to mention the word ghost and would perhaps think of a spook in Scooby Doo. On film this was mocked with E.T. dressed with a sheet over him at Halloween to get him through the streets in E.T. – The Extra Terrestrial (1982) and in Beetlejuice (1988) the dead nice couple fail to scare anyone with their ‘ghost’ act. Inn John Carpenter’s Halloween (1988) it takes on a more menacing appearance with Michael Myers taunting one of his victims with a sheet over him and wearing his intended victim’s dead boyfriend’s glasses. Even the poster and DVD/Blu-ray sleeve to the new release suggest something more terrifying. As stated on one of the extras on the disc, this proved more difficult than it may appear.

Released on both DVD and Blu-ray formats the film opens with a quote by Viriginia Woolf, from her 1922 short story, ‘A Haunted House’: “Whatever hour you woke there was a door shutting”, setting up an at least spooky premise. The film is deliberately slow moving that, for the patient viewers, will draw them in and ultimately result in a very rewarding film. This haunting line by Woolf will become relevant to those who think back on the film and find its relevance to grief. It focuses on a young hipster couple (Casey Affleck, resh from his Oscar in Manchester by the Sea and Rooney Mara, re-united again with Affleck from their 2013 indie film, Ain’t Them Bodies Saints) who have a loving and close relationship. They are a couple who seem in tune with each other and very much in love. They discuss whether to move from their modest home in a Texas suburb, but for some reason for which he can’t explain the man wants to stay (there names are never revealed). One night they are awoken by something falling on the piano, spooking the pair. A little later he is killed in a car accident near to their home. While in the morgue she identifies his body as her lover. When she departs he gets up, still draped in the mortuary cloth but now with two eye holes cut out. He makes his way back to their home but she can’t see his ghostly form and he is unable to communicate with her. Still covered in the shroud he watches her as she eats, cries and is sick. One day she moves from the home and leaves for good. Over the years, time seems to pass and other families move in (with children the only one who can see the ghost), he haunts amilies as a potergeist, observes neighbourly ghosts, similarly attired, his beloved home demolished, as well as a futuristic city in the future and the location of his house in the 19th century.

While the premise of the film might seem like Ghost (1990), A Ghost Story makes that film look even more trite than you already thought. The strength of the film is the sense of loss and melancholic grief running through it. Mara herself had stated during the long take she is eating his ghost looming over her (she not aware of his presence) was very lonely to shoot, adding further power to the film. The influences of the film has the moody atmosphere of Terence Malick’s Tree of Life (2011), with the same haunting atmosphere of Apichatpong Weerasethakul’s similar Thai ghost film, Uncle Boonmee Who Can Recall His Past Lives (2010), a director who’s style director David Lowery has often cited. Lowery has only made a handful of films, but this contrasts hugely with his previous film, the Walt Disney family film, Pete’s Dragon (2016), but this film feels like a very personal film for the director and is a film with great sensitivity and intellect.

There is one scene that might jarr some viewers. Musician and now actor Will Oldham (formerly of The Palace Brothers and Bonnie Prince Charlie) plays an annoying philosopher at a party. Affleck’s ghost is looming over him as Oldham delivers his pretentious monologue about existence. This is one of the longest tracts of dialogue in the film in one of the few pieces of dialogue in an almost silent, if not quiet film as its purpose is to verbalise the after life. Never the less Lowery’s film is a small but genuine surprise and demands a repeat viewing.

Extras include a commentary by Lowery and others in the crew, a piece on the wonderfully espically haunting score by Daniel Hart, a composer who regularly works with Lowery. There is also a featurette interviewing Lowery and other members of the crew.