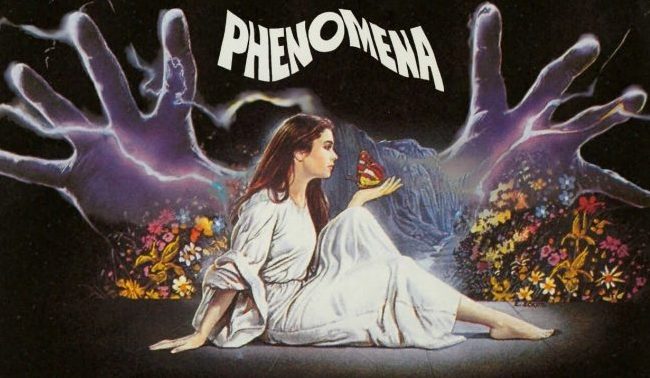 The mantle of leading Italian giallo director was handed down to Dario Argento from Mario Bava following Argento’s critical and cult success with Suspiria in 1976. That film was intended to have been the start of a trilogy of films. He followed Suspiria with Inferno (1980) and Tenebrae (1982) and preceded Suspiria with the strange and dream-like Deep Red (1975) (all these films have been released on Arrow Video, along with his his earlier films which are also on the label or set to be released). The latest release by Arrow Video on Blu-ray is the film made after Tenebrae, Phenomena (1985), arguably the most hit and miss of all his horror thrillers. What the film does have that singles it out from the others is its interesting Swiss locations.

The film opens on the a road between Zurich and Winterthur where a teenage school girl alights from a bus seemingly in the middle of nowhere. She walks to a house and knocks on the door. No one answers but makes her way in looking for something or someone. She is attacked and chased by an unknown caped stranger who chases her to a waterfall where he decapitates her and throws her head into the river. Several months later an American girl, Jennifer Corvino (a young Jennifer Connelly) arrives in Switzerland to begin at the Richard Wagner Academy for Girls, a girls only private boarding school. Jenny shares a room with another girl. However, Jenny sleepwalks and finds herself on the roof of the school. When she wakes she witnesses another girl being murdered in the nearby woods. Jenny collapses and is unsure whether what she has seen is a dream or reality. Her chaperone, Frau Brückner (Daria Nicoldi) starts to believe that Jenny is both just a strange girl and a fantasist. Jenny becomes lost in the woods when she stumbles on the house of a Scottish entomologist, Dr. John McGregor (Donald Pleasance). She befriends McGregor (and his pet chimpanzee) and reveals to him that she can communicate with flies and insects and has telepathic abilities. Meanwhile, Jenny’s sleepwalking and often strange behaviour leads the school to send her for some brain tests. Not long later, Jenny’s roommate, Sophie is also murdered. Her fellow schoolmate’s begin to isolate Jenny and suspect that she is behind the spate of brutal murders.

There is a lot going on in this film and not all of it feels to gel together. Not Argento’s best film and his first film in English with an early performance by Connelly. The fault of the film or some of its failure may lie in the director perhaps not able to handle the English dialogue very well with some poor lines. The killer cries out to Jennifer near the end of the film: “I killed that no-good inspector and your professor friend, to protect him! And now… I’m gonna KILL YOU TO AVENGE HIM! Why don’t you call your INSECTS! GO ON! CALL! CALL!” All a bit silly. What the film does have, and follows on from the director’s other films is an interesting use of dream-like cinematography and a great sense of style. It also has the great horror hack Donald Pleasance providing support (replete with a Scottish accent) and his vengeful monkey (no clue what that is all about).

Previously released last May, this version released by Arrow Video is the standard edition. The only significant extras are the commentary by giallo expert Troy Howarth and a superb and thorough 2 hour documentary on the film including interviews with Argento. The version on the disc is the longer Italian one (at 116 minutes). This means that  on the the English language track, which is some 6 minutes shorter than the Italian printonly has Italian dialogue on the scenes not on the English one.