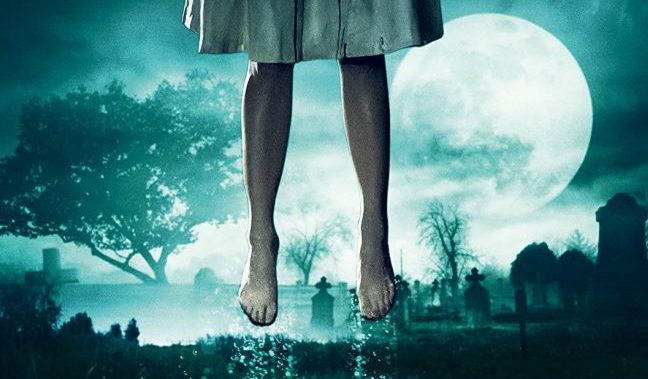 [This review contains a spoiler alert]. A Southern Gothic horror would be the best way to describe this new horror film. Much of the publicity for the film focused that it’s based off a novel by Michael McDowell who had previously been the script writer for Beetlejuice (1988). While Cold Moon (2016) in one sense is very different type of horror film to Beetlejuice, there are also a few moments that are reminiscent of Tim Burton’s film. The Southern Gothic elements brings all the tropes one would expect from a gothic horror set in the South: swamps, Spanish moss, the supernatural and old ante bellum homes. Also, while it is set in Florida (I would assume somewherer near Pensacola, it was filmed in nearby Louisiana).

From the beginning there is a sense that this might be a throwback to the old 1980s slasher films. The opening of the film tells us that it is set in Babylon, Florida in 1989. Innocent 16-year-old Margaret Larkin (Sara Catherine Bellamy) runs an errand for her grandmother, Evelyn (Candy Clark) and takes off on her bike. The next day it’s reported that Margaret never came back and is reported missing. While on her way home Margaret is stopped on an old bridge where literally runs into a black leather masked killer who throws her and her bike into the creek and kills her. When her body (and bike) is recovered, it’s believed that there is a serial killer stalking the local area. Naturally, her grandmother is devastated. It is also revealed that there the girl was a few months pregnant.

A local son of a banker, Nathan Redfield (Josh Stewart) pins the blame on an unpopular teacher as the one who also got the girl pregnant and is initially arrested. That evening the body or spirit of Margaret rises from the creek. Nathan is then haunted by the ghost of Margaret who keeps cropping up which begins to drive Nathan insane. About midway through the film it becomes apparent that much of this might be in Nathan’s disturbed mind. In a surprising reveal Nathan and his kid brother turn to the grandmother and Margaret’s brother who are also murdered (with an old Civil War sabre). While Nathan continues to be haunted, he is now also spooked by the spectres of his new victims and seems to loose a further grip on reality.

Much of the effectiveness of the horror of the first part of the film disintegrates in the second half. This is not because of the lack of horror, in fact it escalates, but once it is revealed that the nightmares are inside Nathan’s head they seem to be less threatening. There is a moody atmosphere that permeates through the film from the beginning and, as with the horror this also dissipates by the end. The ghosts, however, are indeed creepy. Meanwhile, the snakes coming out of their heads and the extended necks seem to be lifted directly from Beetlejuice and with it ventures into pastiche silliness. There also seems to be a continuity issue – while alive Margaret is winning trousers, but when she is a ghost and rises from the river to haunt Nathan she is wearing a dress.

There is also the added bonus of Christopher Lloyd appearing in the film who plays Nathan’s ageing and, it has to be said, creepy father. Lloyd had a great role in a horror film last year in I am Not a Serial Killer. This time he seems more than a little pervy towards a sexy local girl (Rachele Brooke Smith), the daughter of the local sheriff (Frank Whaley) and who is also having a furtive affair with Nathan. Their scenes together are very disquieting. In many senses both Brooke Smith and Lloyd both also bring the more sinister southern elements to the film. Never the less, the film is a welcome horror film to the canon of films set among the ghosts of the Deep South.

Released by Bulldog Film Distribution, there are no extras on the disc.