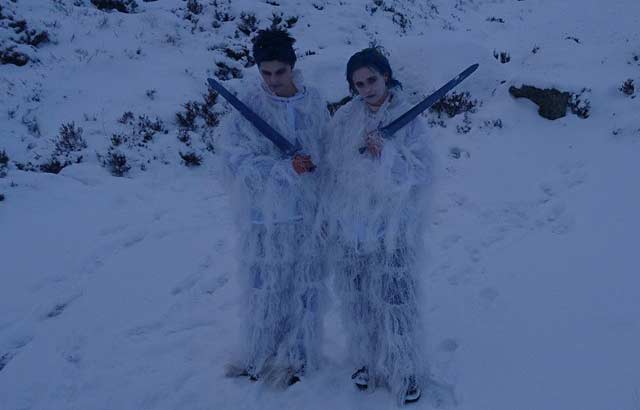 On paper, two such disparate bands as Kelora and Edinburgh Leisure might seem an unlikely double bill, yet in practice, both bands worked well together, their very different approaches linked by a desire to go against the grain, and kick against the pricks.
Edinburgh Leisure are the new project of Keith Farquhar, former frontman of cult band The Male Nurse, now better known as one of Scotland’s more provocative visual artists. As in his art, mundane household objects are subverted; a stapling gun becomes a percussion instrument, as does ripped masking tape, unravelling to chaotic effect on stage. In Farquhar’s hands, a guitar is merely an object to be beaten – hard – with a bamboo cane.
While this is music with one foot in a confrontationally avant-garde tradition, it’s also quite accessible, indeed compelling, with the guitarist’s hypnotic riffs holding it together, and exploring the outer reaches of the fretboard on Scorpio Leisure (named after a sauna-cum-brothel in Edinburgh).
As this track and the band’s name suggest, Edinburgh Leisure are the latest chapter in Farquhar’s onslaught against the banality of Edinburgh’s touristic culture, and he’s a compelling figure to watch, seething with barely suppressed rage. This isn’t merely reserved for Edinburgh though – Dada’s Boys brutally skewers the art world in Europe at large, with Farquhar calling out prominent galleries as “bastards”. The chaos culminates with Yes, a song consisting of the single word repeated to the point of meaningless – whether it’s ‘yes’ to sex or Scottish independence, Edinburgh Leisure aren’t saying.
Glasgow-based Kelora inhabit a parallel musical universe to Edinburgh Leisure, and to most bands really – they sound absolutely nothing like a band from Glasgow, for one thing. The duo of Benedict Salter and Kitty Hall come on bedecked in ghillie suits, a kind of Scottish winter camo for the Highlands, perfect for a snowy night in the capital. They form an unsettlingly androgynous visual and vocal fusion; keyboard player Finn O’Hara – in more proletarian hi-vis gear – backing with subtle electronic flourishes.
The sound is a mutant form of attenuated Gothic neo-folk, retrofitted for the present, clearly made by people who live in a city and aren’t trying to pretend they live in a dry stane dyke in the 14th century. Opener 999 has a brooding fairy tale menace, which is sustained throughout the set. Kelora are a band with real presence, who create a seductively eerie atmosphere with the most minimal of means. They close with the ravishing Boy, a haunting hymn to urban alienation which was one of the best debut singles of the past year.
Kelora are definitely one of the most interesting and unusual bands to emerge from Glasgow recently, and testimony to the sheer diversity of that city’s music scene.