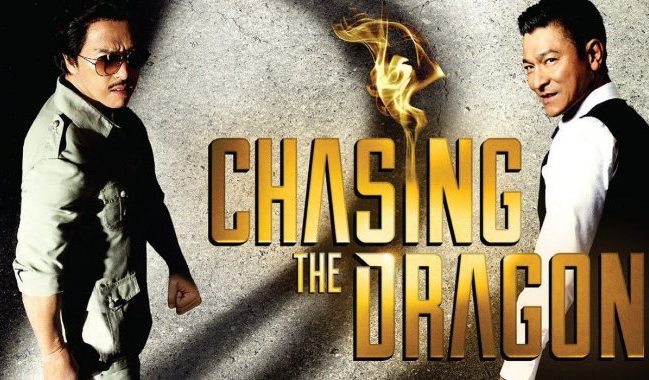 Chasing the Dragon (2017) is a Hong Kong – Chinese co-production that traces the story of a drug dealer and gangster and his relationship with a police detective. It is based off the true story of one of Hong Kong’s crime lords who was known as Crippled Ho and who to some was seen as a folk hero. The plot traces the 11 years between’s Ho’s segue into crime in 1963 and his final arrest in 1974. The film did not receive a general release in the UK, but receives its UK release on DVD from Wellgo USA Entertainment.

There are of course precedents for films like this. Scorsese’s Goodfellas (1990) or Casino (1996) won’t be too far from the mind when watching this film, a director who has also made some folk heroes out of some pretty violent individuals because of some sense of good in them. But Chasing the Dragon (it’s drug reference in the title is also clear) has predecessors in Hong Kong too: the film was also based off a series of adventures about the cop, Lee Rock, played both here and in the previous films by Andy Lau, which commenced in 1991 and was followed by two other sequels. In the same year there was also a film directly about Ho called To be Number One, made the same year as real life Crippled Ho died from cancer.

The film opens in 1963 with a series of incidents that brought a Chinese immigrant to Hong Kong, Ng Sek-ho (Donnie Yen) into contact with police sergeant Lee Rock (Lau). Sek-ho finds himself in prison thanks to a corrupt (and frankly racist and colonial) police officer, Hunter (Bryan Larkin). Abused and beaten by Hunter in jail for giving him some damage, Ho is saved by Rock and agrees to help him. In time Ho muscles in with the aid of his family on the other Triad organizations before becoming the king pin of Kowloon, an area of Hong Kong not controlled by the British. When Lee is caught in an entrapment by Ho’s nemesis, Bro Chubby, he is saved single handedly by Ho who in turn is left crippled for his efforts and becomes known as Crippled Ho. Lee is indebted to Ho and along with his sidekick, Brother Piggy (Kent Cheng) they protect and take money from Ho, even when he moves operations into the Golden Triangle of South East Asia. Never the less Bro Chubby, corrupt officials and cops are all lining up to bring Crippled Ho down.

The choreography of the action is first rate and, let’s face it anyone watching this film it gives them what they want in spades. Some of the acting is a little ropey, especially by the English speaking performers and it tries to inject a fair bit of humour into the film to keep it somewhat light amongst all the violence. But the film is led by two actors with good credentials and acting chops in the shape of Yen and Lau who have acted together previously, but not for some 20 years. But, as typical with films of this genre, wherever they are made the effects of drug dealing is limited to only being dangerous to the gangsters and the police with little sign there are wider social implications and the damage it does to people’s lives. The journey in the end is worth it and will entertain.

There are no extras other than a trailer.