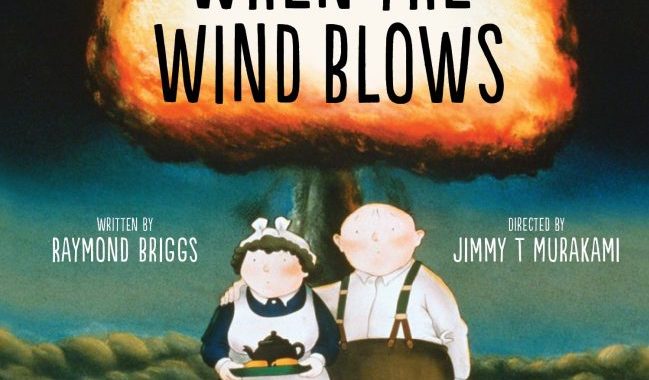 These days it is easy to forget how it was to live in fear of the bomb, even as relatively recent as the 1980s and for those who lived through it. There was even an international government acronym for what a nuclear war or attack would mean: M.A.D. (Mutually Assured Destruction). The government, as well as international events were a constant reminder of the possibility of nuclear destruction: the Russian invasion of Afghanistan, belicose language between President Ronald Reagan in the USA and the Soviet leadership, the Greenham Common protests (seen at the beginning of the film), army exercises and large numbers of Allied soldiers in West Germany and of course the ‘Protect and Survive’ leaflets made available by the C.O.I. (Central Office of Information) as well as the short films the C.O.I. made (more on this later).

Raymond Briggs’s stories of course are becoming a part of our national psyche with his stories made into short films including The Snowman (1982), now a staple of every Christmas, Father Christmas (1991), The Snowman and the Snowdog (2012) and the recent and most personal of Briggs’s stories, the highly acclaimed Ethel and Ernest (2012). There is something intrinsically English about Raymond Briggs and that does not shift with the apocalyptic When the Wind Blows (1986). This film will come as something of a shock for those familiar with The Snowman, but there are also many similarities. As in Ernst and Ethel Briggs based the two characters in When the Wind Blows on his own parents. They are not, as many have inferred stupid, for Jim is doing his best to do what he can to protect himself and his wife from a nuclear attack, albeit naively. They are, however, a retired working-class couple who are ill-educated and simple in their outlook on the world. While the interests of Hilda Bloggs (voiced by Peggy Ashcroft) do not go beyond the garden hedge, Jim (voiced by Sir John Mills) is at least aware of the world and history to a degree (he calls Polaris submarines Polar submarines and mis-pronounces El-Alemain as El-Alamoan) and enough to follow the instructions of the ‘Protect and Survive’ leaflet he had picked up from the local library.

Jim and Hilda live in an isolated rural cottage with Jim following the events unfolding in the world with the broadcaster telling us that nuclear war now seems imminent. He follows the ‘Protect and Survive’ leaflet and prepares: 2 pints of water per person for 14 days, some food provisions (he buys two packets of custard creams, a tin of pineapples, a Christmas pudding and half a cake), white washes windows, uses a pair of doors (to be propped up at the required 60° angle) as an inner-core refuge, sand to clean crockery and torches. Hilda seems to be tolerating Jim’s peccadilloes as long as he doesn’t scratch the furniture or mark the curtains. When the 3 minute warning finally comes that a nuclear missile is on its way, Jim curtly bundles Hilda into the inner-core refuge. Once the dust settles, Jim and Hilda survey the damage which is extensive. At first they follow the rules laid out in the book under Jim’s instructions, but as the days go on they return to their ways before the bomb, blindly putting themselves in danger – drinking rain water, going outside and exploring the house. As the days go on and the emergency services fail to come and with no sign of life from anywhere, both Hilda and Jim begin to succomb to radiation sickness.

The origins of the book and subsequent film came to Briggs after watching a BBC ‘Panorama’ documentary on nuclear war and survival. He said that previous to this he had not proferred much opinion to nuclear politics but in time he became a committed supporter of CND (Campaign for Nuclear Disarmament). Briggs successfully highlights the absurdity of the ‘Protect and Survival’ manual and how it even contradicts in places another brochure that was provided by local government, ‘How to Survive a Nuclear War’. Jim blindly and unquestioningly follows the rules set out by the brochures and puts his trust in the “powers-that-be” and scientists, those who caused the situation in the first place. Briggs is also telling us that this couple are from a different time; while Jim tries to understand what’s going on, Hilda would be otherwise ignorant to it all if not for Jim. They confusedly refer to the enemy as ‘Jerry’, then remember it’s the ‘Ruskies’, as well as believing Monty will help them, “if he’s still alive” (Field Marshal Bernard Montgomery, died in 1976) and that the ‘Ruskies’ led by “Molotov” (“Oh no, that’s a cocktail” Jim corrects himself. Molotov was Soviet Foreign Minister under Stalin) “and that Marx fella had something to do with it”. Both of them fail to grasp that this ‘war’ is very different from the last war and persistently make comparisons.

The extras on the disc add some fascinating context to the film. There is an interesting and fine interview with Briggs (made in 2005) and a 1986 documentary in which the filmmakers are all interviewed and give their own responses as to what they would do in the event of a nuclear disaster, with the Chernobyl disaster and other nuclear tensions at the forefront of their minds. In keeping with the BFI’s pursuit of social history through film the most interesting of these is the full collection of Protect and Survive public information films, all 20 edited into one piece. Made in 1975 and shown for the next 6 years or so along with the leaflet, which could also be bought for what Times critic David Robinson said “offered in 1980 to the provident at a pre-apocalypse price of 50p.” There is also a documentary about the director, Japanese American director Jimmy Murakami who had also directed The Snowman.

Despite being an animation, When the Wind Blows is probably more effective than any other film at portraying nuclear attack, only another animated film, the Japanese Grave of the Fireflies (1988) comes anywhere near. The film, not often seen since its release, seems all the more relevant given recent events and the aggressive nuclear standoff dialogue between the White House and Pyongyang. Whether the world will see, listen and think on seeing a film such as this is unlikely.