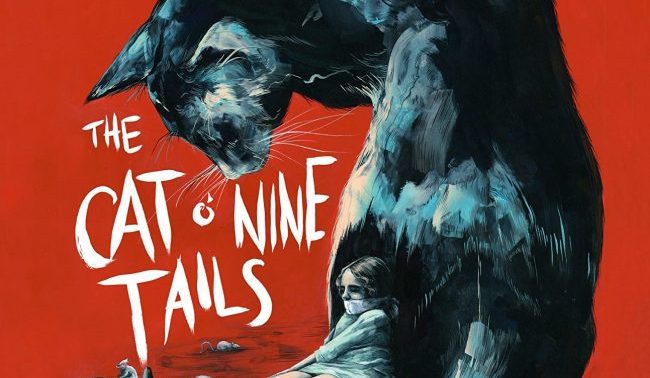 The legendary Dario Argento followed his success with The Bird With the Crystal Plummage (1970) (also recently released by Arrow Video) with Cat O’Nine Tails (1971). The Italian giallo thrillers were a very popular genre. The Italian giallo (giallo coming from the Italian word for yellow, the colour of the spines for Italian pulp crime novels) were numerous and popular in the early 1970s, even if these films were being made since the early 60s, especially by Mario Bava. With these films and its follow-up, Four Flies on Grey Velvet (also 1971) Argento led the way for other giallo directors such as Lucio Fulci and Sergio Martino; these three films became known as the ‘Animal trilogy’.

The style and themes of Cat O’Nine Tails remained from his first film. The film opens with a blind man, Franco Arno (Karl Malden) walking home one night with his young niece, Lori (Cinzia De Carolis). They walked past a parked car and overhear (as a blind man cliche, it would appear he has higher hearing perception) a man talking about blackmail. The man is later seen breaking into a pharmaceutical building. The next day Franco hears of the break-in and comes into contact with a journalist, Carlo Giodarni (James Franciscus) who believes what Franco said he overheard. Following this people, everyone Franco and Carlo come across who help them with the investigation are brutally murdered by an unknown killer, leaving Carlo, Franco and Lori in danger of being murdered themselves.

After he made this film, Argento felt that the finished film was less successful than The Bird With the Crystal Plummage, as he felt it seemed too American, and it is easy to see what Argento meant. This goes beyond the starring roles going to two American actors, Malden and Franciscus as there are scenes that do have an American/Hollywood feel to them, such as the finale fight between Franciscus and the killer on the roof of the pharmaceutical building with its typical Hollywood climax. Never the less, in an interview with Argento on the disc, he soon got over this disappointment with the film when he started to realise that the film was many more times successful at the box-office than his first film.

The story iself was little different from many thrillers made in Hollywood, but what sets the Italian thrillers apart is the imaginative (and often close-up) violence that’s committed against the victims, such as the garotting against the photographer or the victim thrown in front of the train. But the most effective gialloesque shots are the close-ups of the killer’s eye adding an unsettling mystery to the proceedings. Other typical aspects of the giallo style in Cat O’Nine Tails is the typical romantic and strangely haunting score by Ennio Morricone. In addition, the film makes good use of its Turin locations.

Extras on the disc include a frank interview with Argento who speaks refreshingly honestly about the film and about his misgivings. He speaks of his affection for Karl Malden, who of course had been a solid character actor from the method school from the Group Theatre becoming an established serious actor in the 1950s and tutored and appeared in many films with Marlon Brando (as well as appearing in the popular cult TV police show in the 1970s, ‘Streets of San Francisco’). On the other hand, Argento said James Franciscus was very aloof and difficult to get to know. Other extras inclide the alternative ending, an interview with co-writer Dardano Sacchetti and Argento’s friend and regular production manager, Angelo Iacano.