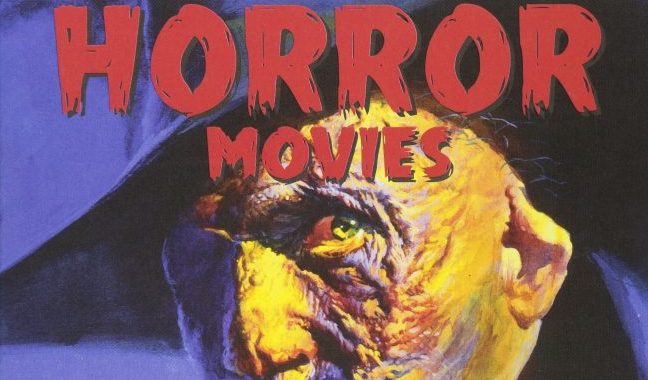 The Art of Horror Movies Review

In 2015 Applause Cinema and Theatre Books published the beautifully glossy and colourfully illustrated ‘An Illustrated History: The Art of Horror’, an LP sized cloth hardback bound book with hundreds of illustrations and short essays written by horror film, book and magazine specialists. The chapters are presented in a sort of chronological order, covering Dracula, vampires, the Mummy, the Frankenstein monster, werewolves, zombies and so on. This covered literature illustration, magazines, movies and even paintings influenced by the world of horror.

The new book, recently published is exactly the same format, but this time solely dedicated to horror cinema. The format is exactly the same and works as a companion to the first volume. It is, this time layed out in a clearer chronological order starting with silent cinema, fading into Lon Chaney Senior and of course the Universal horror films, Poverty Row pictures of the 1940s and so on. It goes pretty well into the 1990s and while there are examples from more recent horror films this is less well covered. Many of the contributing writers are the same: Lisa Morton, Kim Newman and Barry Forshaw, but also has chapters written by other horror luminaries, such as Jonathan Rigby and Christopher Frayling.

Even for those with a broad knowledge of horror cinema will be intrigued and fascinated by this book. The majority of the illustrations are of horror movie posters from all over the world with text stating the origin and whether they are banner posters, quads, half-sheets or one-sheets and in some cases who the artist is. You might need to do some research yourself to distinguish the different between these types of poster. Alongside all these colourful posters there are also modern (as opposed to Modernist) and contemporary paintings based off stills from some of the iconic images of horror, be it Bela Lugosi’s Dracula or Karloff’s Frankenstein monster, as well as Lon Chaney Senior’s top hatted and sinister vampire from the long lost London After Midnight (1927) which, never the less remains an iconic image from the history of horror cinema.

As well as artists who create original artworks in oil, acrilyc, watercolour or pencil, a new type of name artist are also beginning to emerge. I am thinking of the likes of Graham Humphreys, a very prolific illustrator and artist who designs posters for horror and fantasy film festivals such as Frightfest as well as providing original artwork for such specialist DVD and Blu-ray labels as Arrow Video, Secondsight and Odeon Entertainment. There is a current trend for reversible sleeves, on one side perhaps an adapted poster from the original release and on the other a specially commissioned piece of artwork.

Once again edited by Stephen Jones with a foreward this time by John (An American Werewolf in London) Landis this is most definately a must have book to have on the shelf for any fans of horror movies, even if it’s as a sort of gory gothic table book (the cover has an acrilyc painting of a scarred Vincent Price from House of Wax, 1953, painted by American artist Barry Gogos). It would be fair to say that many of the posters or works illustrated have never been seen in print before and at over 250 pages it is worth its relatively reasonable price which will not break the piggy bank.

For horror nerds like myself this book is wonderfully immersive and can allow people, like myself to be self indulgent and lose the time of day. I feel a Science-Fiction variant of this will probably on be on the cards at some point. For that one, the theme of the first book would probably work better and would be a nice updating of David A. Kyle’s wonderful ‘A Pictorial History of Science Fiction’ from 1979.