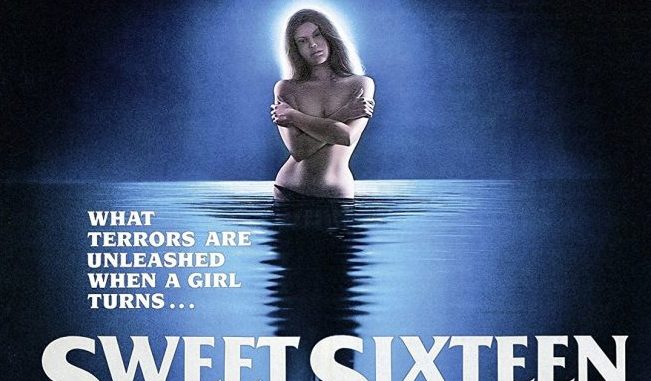 88 Films have released no less than their 33rd title in the 88Film’s Slasher Classics Collection. Sweet Sixteen (1983) is a long forgotten slasher with a half decent cast. The story follows a young 15-year-old who arrives in a small Texas town where all the young men want to date her before long knifed to death. The town sheriff (Bo Hopkins) and his kids help investigate. The story and the way the film is presented is a fairly typical and standard 80s slasher, bringing nothing new to the sub-genre. Part of the problem is that there is no shtick to the serial killer: no miner’s costume and gas mask (My Bloody Valentine, 1981), no William Shatner mask (the Halloween films), no ice hockey mask (the Friday the 13th films), ghost mask (the Scream films) or any special killing implement such as large shears (The Burning, 1981) and so on.

There are also relatively few murders in the film, although these are fairly well done with the usual POV angle so as not to give away the killer. Unlike some genre movies the film doesn’t go to the grisly inventive levels to show macabre killings but are instead carried out in a more matter of fact manner and relatively there are few at that. Hopkins, who always seems to play town sheriffs plays in type here as the genial cop. Director Jim Sotos (real name, Dimitri Sotirakis) only made a small handful of low budget films, this being his second. His first film, Forced Entry (1975) was an early cheap exploitation slasher about a rapist and murderer bumping off prostitutes and therefore already had form for the slasher. This film is a little less exploitative, although there is something rather voyeuristic about it too. The older cast are okay, let down by some fairly poor performances from its younger actors. This all comes to ahead with the usual reveal as to who the serial killer is with some very poor explanation of the events that led to the murders.

What the slasher films released through 88 Films lack in quality is made up for in terms of preserving or re-visiting long forgotten films from the VHS period, gaining new viewers and those who saw them originally to view them with a new appreciation and far better picture quality. The only extra on the disc is a talk on the film by Jim Harper, author of ‘Legacy Of Blood: A Comprehensive Guide to Slasher Movies’. Giving even greater depth to the film, there is also an audio commentary by ‘The Hysteria Continues’ podcast team who discuss the film a great length.