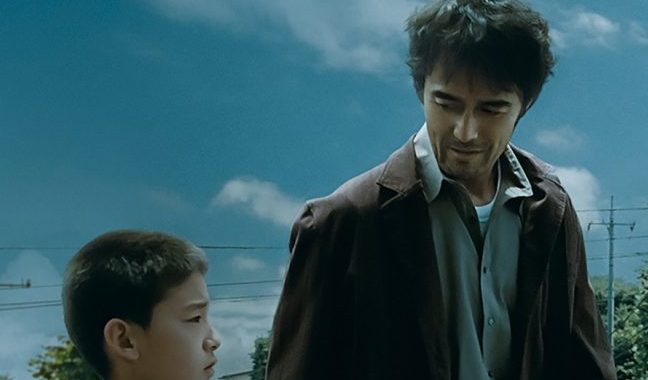 After the Storm is a family drama that almost entirely focuses on the family members of the story. It stars Hiroshi Abe as Ryota Shinoda who travels back home to his ageing mother, Yoshiko (Kiki Kilin) in suburban Tokyo following the death of his father. Ryota had some success 15 years ago with his novel when he was awarded a prize. He is now struggling for money, trying to balance writing a new novel with his part-time job working at a detective agency. Ryota is somewhat disheveled and knows that he is a disappointment to his mother who sees him as a similar type of waster as his father. Ryota’s sister is wary of him, believeing that everytime she sees him he is there to tap her for money. But he has other motivations. He has a son and his ex-wife will deny him access unless he pays for child support for their young son.

After the Storm (2016) is the latest family drama from Japanese director, Hirozaku Kore-eda. Many have compared his family dramas to the films of one of the greatest directors of all time, Yasujiro Ozu. On an interview on the disc Kore-eda, does not believe that Ozu had such a big impact on his career and admits that Mikio Naruse, a contemporary of Ozu had a bigger impact. But he also cites Ken Loach as an influence (to that Mike Leigh can also be added). The housing estate where the film is set is also similar to the milieu and lower middle-class (shomin-geki) from the previous masters films. The mise-en-scène is well put together. The camera spends a good deal of time in the grandmother’s apartment that looks cluttered with the 40 years of stuff she has accumulated over the years. In the kitchen, appliances and kitchen things look old and tired, while the daughter automatically ducks her head everytime the fridge door is open, aware of how compact this family room is.

Kore-eda’s film does highlight, while the family unit in question is fragile, there is love there, even if Ryota is something of a waster. Abe is well cast in the lead – he is tall, slim, unshaven with Western like features. He is handsome and rugged and with a look that he could be quite the catch if he took better care of himself; Abe had previously appeared in a similar role in Kore-eda’s Still Walking (2008). Other actors in the film, including Kilin have also appeared in other films by Kore-eda. The only time we do not see Abe with family members is when he is working as a private detective for an agency, itself something of a seedy career and, like everything else in his life is not done entirely honest. He is seen shaking one target down and reversing that, for a fee, on the client. He also uses it to spy on his ex-wife. But at heart Abe is a nice person – just a desperate one and, like Josef K is ultimately his own worst enemy. Ultimately it is the wisdom of Ryota’s mother who tells her son that his problem is that he lives in the past – as he talks at length about the playground, the locale and resting on his laurels since his book success some 15 years before (we’ve already seen her throw out her dead husband’s belongings the day after he died).

Also released on the same date as After the Storm, ‘Family Values: Three Films by Hirozaku Kore-eda, a limited edition three film box-set is also released by Arrow Academy. Seen collectively there are running threads that run through all these films from the family dramas to the repeat use of some of the actors (again like Ozu and Naruse). At 2 hours (the length of many of his films) it is a little overlong, though never the less looks good and there are plenty of extras on the disc, including a context setting interview with the director and a feature length documentary on the making of the film. His films, despite their simplicity can be difficult to get into, but are in the end rewarding.