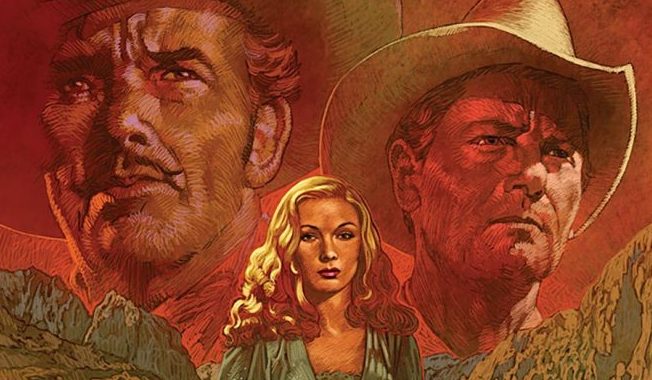 Since the Second World War and even during with films like The Ox Bow Incident (1943), Westerns were moving away from formula and towards what became sub-termed as the psychological Western. Concurrently there was also film noir, a genre normally associated with hard boiled thrillers than Westerns. Of course films were not consciously made as film noirs, but instead, as many have read, a statement on the times and the reactions to the darkness of the war years. In other words a deeper exploration of the human psyche, in particular its darker aspects. Ramrod, a Western made in 1947 is a particular film of this type.

Directed by Andre de Toth, Ramrod was released the same year as possibly the most noirish Western of all, Pursued starring Robert Mitchum. Pursued was driven by its dark back story, nightmares and dreams against the backdrop of a wild wilderness, but Ramrod was one of those other films in post-war Hollywood that brought a more heightened realism and mature adult themes to the Western genre. Of course Ramrod didn’t go too far as at the centre of the drama in the film there is still a love interest – a complex duplicitous female and a nice girl (who is far from dowdy or wearing frontier clothing, but is never the less a dressmaker and a nurse).

The basic story of Ramrod (based off a novel by Luke Short) is a rather typical Western plot about a cattle baron attempting to push other farmers and sheep owners off their land. There is also a love interest with the central character and typical cool Western hero, Dave Nash (Joel McCrea). De Toth has given him a flawed human element as other cowboys in the town mock him for his alcohoism (although we never see him falling off the wagon). As a regular good tough guy he is caught between a ruthless and violent cattle baron, Frank Ivey (played by Preston Foster) and a threatened ranch owner under threat, Connie Dickason (Veronica Lake) with eviction after she inherits her ex-fiancee’s ranch, the Circle 66. She refuses, unlike her ex-fiancee to be pushed around by Ivey. Meanwhile, Dave Nash is caught between two women, Connie and a dressmaker from town (Arleen Whelan). Connie secretly causes a stampede to drive Ivey’s cattle off the land leading to a spewing of violence with Ivey in pursuit of Nash.

Veronica Lake, famous for her film noir roles that made her so famous in the early 1940s (usually with Alan Ladd) with her iconic long blonde hair waved down to one side of her face plays a sort of different character here. At the time of making this film she was married to de Toth and had also acted previously with McCrea in the Preston Sturges’ classic, Sullivan’s Travels (1942). But here she takes on many appearances, highlighting her duplicity as a character. The first time we see her as a well dressed lady about town and the next time as the more recognisable Veronica Lake with a nightgown and her long blonde hair seductively down (of course she would also become the model for Jessica Rabbitt in Who Framed Roger Rabbitt?). Later in the film she would be seen either more dowdy and dressed as a frontiers woman.

McCrea too was an actor very familiar with Western fans through the 1940s and 50s, nearly always playing the good tough guy and appears here in his first Western. Playing opposite Lake, there is a dis-unity in their sizes. She was diminutive while he was 6’3″ and highlights further his upright stature. Ramrod is a complex film with a fairly simple plot, but de Toth, far from a journeyman director and whose first Western this gives complexity and detail to many different characters in the film. It was also noticed on its release and since that the film is somewhat more violent than the standard Western at the time. In one such barroom scene there is a fight between McCrea’s character and a cowboy, played by a young Lloyd Bridges who goads Dave for his alcoholism, ending in quite a bloody fight.

As ever with Arrow Academy’s releases of classics, the distributor has gone out of its way to go in with depth with the extras. Not a Western often seen in the UK, Ramrod has been recognised as an undisputed classic of the genre and this is supported by film scholar, Adrian Martin and an appreciation of the film by Peter Stanfield. In addition there are also interviews with Andre de Toth. The film is presented in High Definition but the lines and scratches remain on the film.