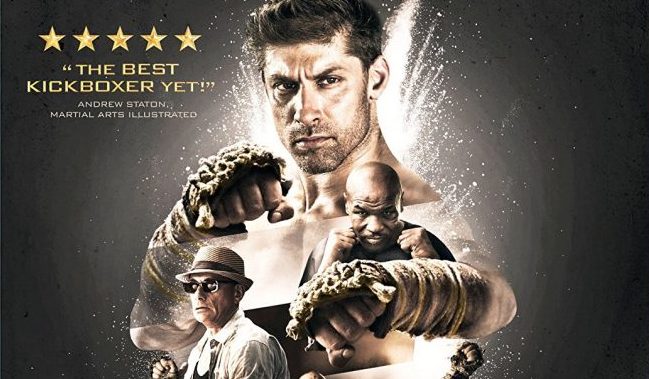 About 18 months ago the remake and re-boot of the original Kickboxer (1989) was released as Kickboxer: Vengeance (2016) starring Alain Moussi in the role of Kurt Sloane, the character that made the Muscles From Brussels himself, Jean-Claude Van Damme famous. Despite its shortcomings and co-starring Van Damme as Sloane’s sensei it was a pretty straight remake of the original. It did also have the bonus of Moussi’s Sloane playing opposite Dave Bautista as his opponent, Tong Po in the cage. The new film, Kickboxer: Retaliation (2018) goes in a different direction to Kickboxer 2: The Road Back (1991), which did not star Van Damme, but instead had buff model Sasha Mitchell playing Sloane’s brother. Oh, yeah, and there’s even a couple of other sequels in the original franchise.

Retaliation is more straight martial arts movie than the earlier where there was much emphasis (like in the 1989 film) on the training session between pupil and sensei that seemed to go on forever, even as a montage. Let me re-phrase that first sentance, Retaliation is more straight video fight game than the first film with lots of digitised and CGI work to enhance the fight sequences, of which there are many.

The story begins 18 months after Kurt Sloane had killed ruthless fighter Tong Po (Bautista) in the first film. He is kidnapped and arrested by the Thai authorities for Po’s murder. Sloane wakes up in a Thai jail where he has been illegally sent without trial when he meets the man who organised his kidnapping, Thomas Moore (Christopher Lambert). It turns out that Moore was the brainchild behind his fight with Po. Moore tries to convince Sloane to fight for him again, but refuses and is subsequently tortured in prison. He wants him to fight a 6’8″ goliath of a fighter called Mongkut (played by professional strongman, the Icelandic, Hafþór Júlíus ‘Thor’ Björnsson). Meanwhile, Sloane’s girlfriend (Sara Malakul Lane) has been kidnapped by Moore’s men leading Sloane to reluctantly agree to do as he says. He learns that his old trainer (Van Damme) has been blinded and finds another tutor in a tough fellow prisoner (Mike Tyson, none the less), with the support of Van Damme. After several scrapes Sloane realises that he has no option but to fight Mongkut, a bio-engineered giant.

The action is plentiful, some of the acting a little ropey, but the film looks good with its Thai locations (with even a bit of Vegas thrown in). The fight sequences though, particularly in what looks like some prehistoric pit between Sloane and Mongkut look animated CGI. I am not suggesting that the CGI is not well done, just over the top. Björnsson’s Mongkut looks more like an Ork than human with his giant stature in a David and Goliath like sfight sequence, with even Sloane seeming to survive sure death. It ventures more into the realms of fantasy than the against the odds Rocky style fights in the first Kickboxer film.

It would seem that there are elements of the film that ensure that this appeals to an older generation than a younger, mostly due to the casting. Co-starring B movie action stars from the 1980s and 90s with Van Damme and Highlander himself, Christopher Lambert co-starring, not forgetting to mention former World Heavyweight and controversial boxer, Mike Tyson in a cameo appearance (and is 2nd billed!). It might well appeal to an older generation but I would hope in a nostalgic, almost ironic kind of way. There are no extras.