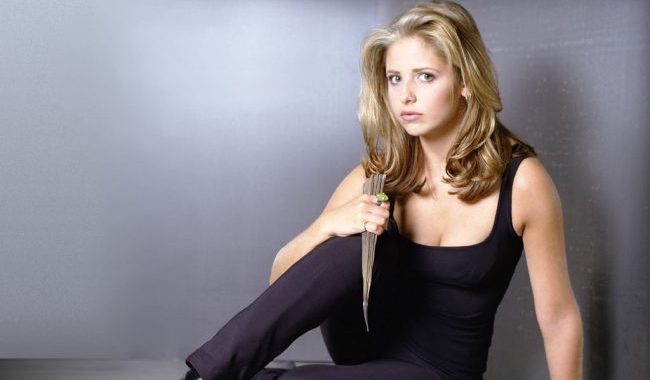 …or to use the book’s full title, ‘Buffy the Vampire Slayer FAQ: All That’s Left to Know About Sunnydale’s Slayer of Vampires, Demons, and Other Forces of Darkness’. Phew! This book goes the whole hog in nailing down the (coffin) lid on Buffy the Vampire Slayer (sorry, I couldn’t resist that one). Buffy, as I am sure most fans will know was a phenomenon that started off as a whimper rather than a bang. The brainchild behind Buffy was Joss Whedon who created the idea around a high school girl and her friends who weed out vampires at Sunnydale High School. The film was made in 1992 and starred Kristy Swanson as Buffy. But of course it was Sarah Michelle Gellar who made the role famous, but the original film included a strong support cast including Donald Sutherland, who was the book alleges, very embarrassed during the filming, he refused to even say the name of the film he was appearing in (true, that when taken away from the retrospective knowledge of Buffy, it does sound a bizarre title). Other esteemed names in the cast included Paul Reubens, Rutger Hauer, Luke Perry, Candy Clark, Hilary Swank, David Arquette and a young Thomas Jane. An impressive cast, but this wasn’t enough to save the film and although it made a profit, it was only a modest success.

It wasn’t until many years later when Whedon approached TV when the offer was taken up by the WB Network. It first aired on TV in 1997 and very quickly became a cult success, introducing new characters with of course Gellar picking up the stake knocking off the vamps. Although it never reached the success of say ‘Dawson’s Creek’, but ran with natural diminshing viewership in 2003. Of course Buffy became a huge success and created around itself a kind of Buffyverse. The book, as all the FAQ books goes into great depth with the analysis of each season which ran from seasons one to eight. With each chapter, authors David Bushman and Arthur Smith inform us how each season did with the ratings, the personnel and cast changes and in particular goes into great detail about the breakdown of virtually every single character ranging from a couple of pages per character to a few lines.

This book is not going to gain any new audiences or gain ‘Buffy the Vampire Slayer’ any more cult followers. Never the less for those already bought in fans it’ll be an interesting and indepth read. For the record I am no fan of the series. I vaguely enjoyed the film, but where it does lack is much in the way of references or influences beyond the B movie Night of the Comet (1984) and The Lost Boys (1987).