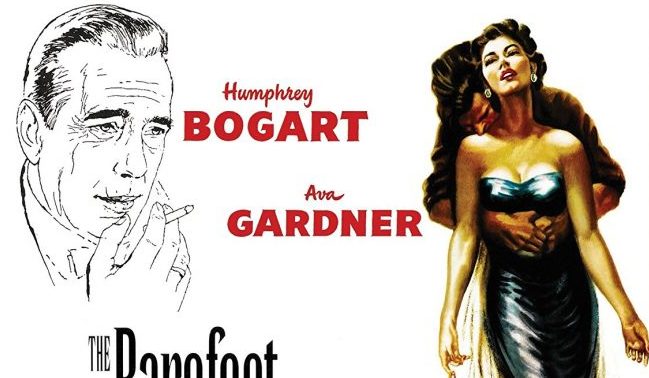 In 1950 Joseph L. Mankiewicz scored a hit with 6 Academy Awards winner All About Eve (1950). He attempted to repeat the success of that film about the stage with one about a movie star, The Barefoot Contessa (1954). Much was expected of this film. It opens with a flashback sequence – more Citizen Kane (1941) than film noir. The opening shots are of a funeral scene in an Italian cemetry. A lonely figure and narrator is standing in the rain in his distinctive mac. He is Harry Dawes (Humphrey Bogart), a Hollywood director who as the first narrator recalls the life of the woman being buried, whom we are told was the Contessa Torlato-Favrini, otherwise known as Maria Vargas. We are told that the woman, although having only made three films was a sensation. She is being buried in Italy, but hails from Spain where the flashback sequence takes us to. In Madrid Dawes is looking for the next big thing when he is told about a barefoot flamenco dancer working in a bar. He attends with the workhorse and ego-maniac Hollywood producer and whizzkid Kirk Edwards (Warren Stevens) who treats Dawes appallingly. The pair are looking for a new leading lady for their latest film and think they have found her when they meet her. A free spirit, Maria (Ava Gardner) isn’t impressed and leaves, but Dawes tracks her down and persuades her to leave her troubled homelife Hollywood with them.

Dawes, Edwards and the with the help of Hollywood publicist, Oscar Muldoon (Edmond O’Brien), between them they develop and create the image of Maria Vargas and transform her into a Hollywood star a name change, Maria D’Amata. Much of the film is narrated through different perspectives, from Muldoon to Edwards and their impressions and memories of her, creating a multi-perspective impression of Maria. Maria wishes to have the same happiness Dawes has with his wife (Elizabeth Sellars); she is aware that her good looks mean misfortune for her as men pursue her as a trophy, to use her sexually and exploit her, until she meets who she believes is the right man, the old fashioned and handsome nobleman, Count Vincenzo Torlato-Favrini (played by the great romantic lover Rosanno Brazzi).

Although film is essentially about Hollywood, it was shot entirely in Italy, on location and at Cinecitta Studios, Rome making good use of such gorgeous Italian locations as San Remo and Portofino. It also makes good use of Gardner’s beautiful looks shot by British cinematographer and Michael Powell regular, Jack Cardiff (who had previously shot Gardner in Pandora and the Flying Dutchman, 1951). The colours are rich and the film does look like it could do with a bit of a clean-up. Never the less, it is not short of controversies; any movie that takes a look at the industry would not be short of controversy. Many concluded that the inspiration for Gardner’s character was Rita Hayworth, the American born actress to Spanish parents and a true Hollywood siren. Hayworth had married Prince Aly Khan launching her into nobility. Young Hollywood eccentric mogul Howard Hughes thought that Stevens character Kirk Edwards was based off himself and threatened to sue.

The film was tipped to be a big success, alas it was pipped by another film made the same year that covers a similar subject matter – and that film was a remake. A Star is Born had the good fortune in starring Judy Garland and James Mason, a remake of the 1937 film – that so happened to have been Bogart’s favourite film. Released within a couple of weeks of each other it was Garland’s film that resonated with audiences and had the greater success. This similarity did not go unnoticed by the Hollywood press, one stating ‘A star is stillborn’.

Never the less, while maybe not Hollywood’s greatest film, or even Mankiewicz’s, it never the less is an interesting and quite a moody and classy romantic melodrama from Hollywood. Seeing its first Blu-ray release in the UK and released by Eureka Entertainment on their Masters of Cinema label, it is a worthy release. There is an interesting audio commentary by David Del Valle inclueded on the disc, but otherwise, unusually for the label, has bare bones extras.