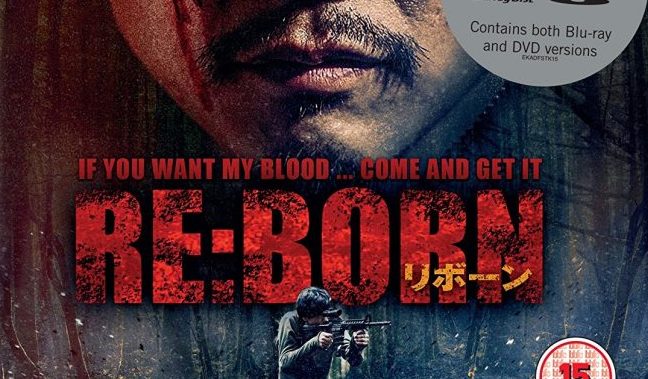 For those who love a kick-ass action film can’t go too wrong with Re:born (2016). Directed by Yûji Shimomura, only his second feature in the director’s seat (his first, Death Trance was made 11 years ago), his background is as a stuntman and co-ordinator which will serve him well here in a film where the action is pretty much non-stop.

Re:born stars the adroit Japanese action star Tak Sakaguchi (now known as Tak ∴ apparently) who has proved his lithe action credentials in the past with such films as his first, Versus (2000) in which he starred as a prisoner in the future pitted against fighting zombies, Alive (2002) and Yakuza Weapon (2011). In Re:born he plays a moody retired covert soldier with a suspect past. A former associate with an army of assassins is after him and his child niece. Toshiro, known as The Ghost, first gets wind that he is a target when an assassin attempts to take him out in a busy piazza, but Toshiro narrowly dodges the bullets (with the public around appearing to be oblivious as to what is going on) before he sticks a stiletto in the potential killer’s neck. This scene is very reminiscent of a recent Hungarian film, also released by Eureka Entertainment on their Montage Pictures sub-label, Kills of Wheels (2016) in which a wheelchair bound assassin takes out a target on a busy square. Following this incident a series of other ambushes take place upsetting his quiet life working in a convenience story.

The last third of the film is out and out action as Toshiro and his two martial-arts friends take on over a 100 commandoes as Toshiro’s antagonist holds his niece hostage. The fight sequences are impressive, but with everyone coming at him it’s suspending belief a little too much to believe that he dodges every lunge of a knife, ninja star or bullet. Never the less the action is superbly choreographed with good production values that would put any similar action film if it were made in Hollywood into the shade. Unusual for a Eureka releases, other than a nonsense introduction there are no extras on the disc.