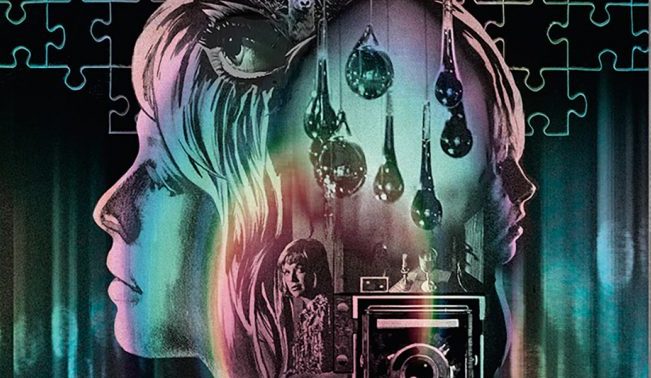 An Anglo-American co-production and filmed in Ireland, Images (1972) is one of director Robert Altman’s lesser known films. It is a psychological horror thriller with two clear influences from the mid-1960s: Roman Polanski’s Repulsion (1965) and Ingmar Bergman’s Persona (1966) and, to a lesser degree Hammer’s Crescendo (1969). This is quite a nerve jangling thriller, very much of its age. Previous to this film Altman had had a string of hits with Brewster McCloud, M*A*S*H (both 1970) and McCabe and Mrs Miller (1971), but Images is closer to a film made by the director immediately prior to these films, That Cold Day in the Park (1969), in which a lonely New York woman takes in a stranger sleeping on a bench. Images is a more direct, strong and unsettling film about the interior mind of its protagonist.

There are only a few actors in the film with the central one being Susannah York who plays Cathryn, a lonely married and children’s author who lives an isolated life. She is married to photographer Hugh (René Auberjonois) who is often away working. One evening, while in their modern apartment she receives phone calls from a woman informing her that Hugh is having an affair. When he comes home they have an argument, but when he holds her she reels back and screams as he is no longer her husband, but instead her late ex-husband. Hugh believes that she is under stress, especially that she is now pregnant and agrees to take her to their countryside home. While in the country, her schizophrenia and paranoia intensifies and the ‘visitations’ from her ex-husband (Marcel Bozzuffi) more frequent. Cathryn and Hugh also befriend and spend time with Marcel (Hugh Millais) and his teenage daughter, Susannah (Cathryn Harrison). The apparitions of her dead ex-husband start to become more pervasive disturbing her further but she learns to live with them until one day she decides to kill him off with a shotgun. However, she is also receiving ‘visits’ by Marcel’s doppelganger, troubling her further and more disturbingly still, herself (in some of the most unsettling scenes).

Images is a film that has never been given the credit it’s due. Despite the protestations by many, including the director himself, it is most certainly a horror film. Of course there are no monsters other than the ones in her head but the film does leave room for doubt that these visitations might be ghosts. Horror film or psychological thriller, it never the less works well and deserves more recognition. As well as the strange storyline and the eerie and autumnal tones of Vilmos Zsigmond’s cinematography the nerve tingling score by John Williams has a chilling tone to it in which the director asked for Williams to provide and make it chilling. Certain sound effects were added making it very effective indeed, more like a discordant cacophony of the Klute (1971) score by Michael Small.

The central performance in the film by Susannah York is outstanding. Altman had met York while on holiday and told her about an idea for a film which she agreed to appear in until she told him she was pregnant. His solution was easy: “we’ll make the character pregnant”. Of course York has had many amazing roles, best known of which is probably The Killing of Sister George (1968). On this film she is also given a co-writing credit, although this is largely down to the inclusion of her own children’s story included in the film, ‘In Search of Unicorns’. The rest of the cast play catch-up with York’s leading performance and interestingly all the characters names in the film interchange with each other, ie. York’s character, Cathryn is that of Cathryn Harrison who’s character is called Susannah and so on.

The budget was relatively low for the film and was it shot almost entirely on location in County Wicklow, Ireland. On the extras on the disc both Altman and the films commentators state that the location was to be deliberately ambiguous but for me it looks every bit like Ireland or the Scottish Highlands. The bleak and rugged landscapes in many ways heightens the sense of loneliness and isolation of York’s character.

Released by Arrow Academy on a new 4K transfer, it is an interesting release from an extraordinarily diverse director that many have failed to pigeon-hole. The production companies he worked for were looking for a repeat of the commercial success of M*A*S*H but he was more interested in the product than box-office returns and, as throughout Altman’s career he relied on the characters to build and create the actors rather than micro-managing his actors. For Altman it mattered little that the film was not a box-office success and considered the film worked if viewers came out scratching their heads having to think about the film. The extras on the disc are plentiful and of quality including Altman talking about the film in a vintage featurette (he died in 2006) as well as a commentary track for the film. There is also an interview with Harrison who plays the teen Susannah and an appreciation by Stephen Thrower. There is also a nice newly commissioned cover to the disc by Twins of Evil.