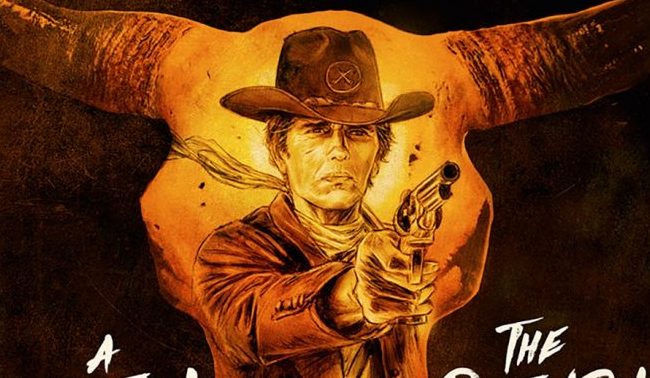 Following the success of Sergio Leone’s A Fistful of Dollars (1964) which starred Clint Eastwood, Europe went mad for what became known as ‘Spaghetti Westerns; in Italy at first before the rest of the world caught up. A Fistful of Dollars had been co-written with Leone by Duccio Tessari, although uncredited he fancied having a go at a western himself. The first of his two Spaghetti Westerns was A Pistol for Ringo which, like A Fistful of Dollars was shot in Almeria in southern Spain, near the coast where its landscapes and passes seem to resemble those of the Wild West, the landscape of the Western imagination at any rate.

A Pistol for Ringo is an early ‘Spaghetti’, it is lighter in tone to Leone’s film and has less of the style of the Master’s films. The central figure, unlike Eastwood’s Man With No Name he does not have the almost supernatural quality of character (a trope of the Italian Western that reached its heights in the Django films), in this first film, but a little more of that creeps into The Return of Ringo. The first film sees Ringo (Giuliano Gemma, but going equally under the Montgomery Wood), otherwise known as ‘Angel Face’ (a name that Eastwood would adopt in the third of Leone’s Dollar trilogy. The Good, the Bad and the Ugly, 1966) playing with some kids when several gunfighters gather behind him. He duly dispatches them with a quick-on-the-draw shoot-out. He is arrested by the sheriff (George Martin, real name Francisco Martínez Celeiro) and put into jail. Meanwhile the town’s bank is robbed by a gang of Mexican bandits led by Sancho (Fernando Sancho) who holds up in a large ranch and promises to kill two people on the ranch a day until they are allowed safe passage. Ringo promises to help if he is released from jail. He makes his way to the ranch unarmed and helps Sancho while disrupting him at the same time to try and stop him.

The next film, The Return of Ringo was filmed back to back with the first film mostly using the same cast and crew. This time though the location moved from Almeria to the interior of Catalonia, west of Barcelona. Most of the exteriors and especially the town are wind strewn with straw blowing around. But the The Return of Ringo is not a sequel to the first film and the tone and atmosphere is somewhat darker than the light hearted action, albeit at times violent action of the first film. Despite the title and a very similar cast, this is not a sequel, or at least a sequel in name only. The return of Ringo of the title refers to Gemma’s character in this film, Captain Montgomery Brown who has returned from the American Civil War to find that his wife and daughter are under the rule of a Mexican gang of bandits, led by Esteban Fuentes (Sancho again) and his ruthless brother, Paco (this time Martin plays the bad guy) who plans to marry by Brown/Ringo’s wife (played by Tessari’s then wife, Lorella De Luca, but here going under the Anglicised name of Hally Hammond and also appeared as the love interest in the first film). Brown, believed dead comes back to town as a Mexican peasant who works for the local florist (Manuel Muñiz). Despite being roughed up by the Fuentes gang he plans to avenge himself and get his wife and child back.

Between the mid-1960s and following the success of the so-called Sword and Sandal epics Italian cinema was becoming popular throughout the 1960s through to the early 80s with genre cinema: horror, crime, giallo, gangster, erotic comedies and of course Spaghetti Westerns, all of which were made in great numbers. Tessari was one of the leading exponents of genre cinema in Italy but these two films were the only westerns he made. Both starring Gemma, a good friend of the director’s, he had been encouraged to change his name for the films to a more American Western name so went by Montgomery Wood. As already established De Luca had also changed her name, as had Martin; this was quite common for Italian Westerns in the late 1960s and early 70s. By contrast Tessari always kept his own name.

Seen together and as a whole in the history of the Italian Western, the two Ringo films are interesting. There is a slight comic and lighter tone to them than the aforementioned Leone films or Django (1966) and some of the better Spaghetti Westerns. The comic support in both films by Muñiz as a weedy character helping Ringo is irritating to the enth degree while Gemma plays his character without taking his role too seriously, but as a former stuntman he clearly does all his own stunt work. The other connection, apart from the obvious with Leone’s films is the Ennio Morricone score. Some of the signature music is very similar to his Dollar Trilogy while he also provides a couple of crooning romantic end songs (sung in English).

Released on Arrow Video, the label also released Tessari’s giallo thriller, The Bloodstained Butterfly (1970) a couple of years ago and have once again excelled themselves with an excellent package including interviews with De Luca and camera operator, Sergio D’Offizi and Gemma who all speak very highly of the relaxed atmosphere on the set. As well as a commentary track there is also an over 30 minute talk on the film by Tony Rayns who, although his knowledge on Italian Westerns may not be as thorough as his expert knowledge on Asian Cinema, never the less brings interesting context to the film.