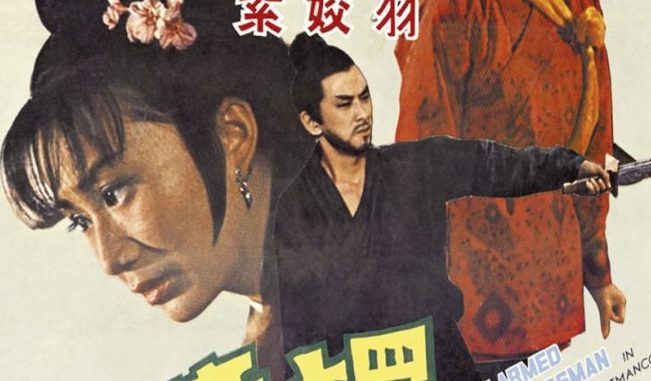 Released by 88 Films, the 15th title in their Asia Collection, the importance of One-Armed Swordsman (1967) cannot be overstated in the history Hong Kong martial arts cinema. Many of the martial-arts genre directors were highly prolific, with a less prolific director, King Hu making some of the key groundbreaking films: Come Drink With Me (1965), Dragon Inn (1967) and the arty A Taste of Zen (1971), but for sheer fun, entertainment and chutpah you can’t too wrong with the hugely successful One-Armed Swordsman.  chutzpah.

Throughout Cheh Chang’s film, unlike many wuxia films there is little shot on location, in fact the sets are obvious and there is an artifice to the film making the film appear like the set of an opera. Many have termed Hollywood Westerns as horse operas and that same term can be labelled here, that films like One-Armed Swordsman are martial-arts operas. The sets are obvious, but that does not necessarilly make the film cheap looking but rather adds to its style. A good example is the scene in which the hero, Jimmy Wong loses his arm during the fight in the snow. Artificial yes, but it is also stylish and almost dreamlike; Toshiya Fujita’s Lady Snowblood (1973) would also have a key fight sequence in a snowy garden (as would Quentin Tarantino’s homage to these films, Kill Bill in 2003). There are also some nice costumes with the male protagonists wearing what would now be called hipster man buns.

The action is, as David West, an expert on martial arts cinema states on an extra on the disc that there is something unrealistic about the action, but instead is more like a ballet. Indeed there is something in this as Chang has mythologised a martial-arts past. Into the mix you can also add the

weapons used by the bad guys in the film, and even by the one-armed swordsman himself with his cut off golden blade, the long grey haired laughing leader of the enemy gang, Long Armed Devil Tiger Cheng (Yeung Chi-hing) uses a a collection of short spears he carries on his back. And best of all there are the bandits who fight with a ‘sword lock’ that catches the opponent’s sword allowing them to disembowel there opponent.

The story is fairly simple. A martial arts school, The Golden Sword is attacked by bandits who use the aforementioned sword locking technique to defeat their opponents. One student, Fang Kang (Wang) is mocked by his fellow students, including a female student, Qi Pei Er (Angela Pan), the daughter of the school’s Master for his peasant background. He refuses to fight with them when he is attacked by the girl who in a fit of pique chops his right arm off. Kang stumbles away and is helped back to fitness by a peasant girl, Xiao Man (Lisa Chiao Chiao). In time he learns to fight again (like many a Western hero who has had his gun fighting arm or hand damaged). Never the less, loyal to his Master he comes to the aid of the school of The Golden Blade to fight off the bandits.

Jimmy Wang stars as Kang, a martial arts action star who was a pre-cursor to Bruce Lee in terms of his popularity in Hong Kong. Although hugely popular in that country, he never achieved the popularity of Lee or Jackie Chan. The film itself fits in the wuxia tradition of martial arts films with several exaggurated leaps which over walls and off buildings, which became a staple of the martial arts film (filmed in reverse, but never the less effective). The foley sounds of the fights are less over the top than in many martial arts films

As an earlier actioner from the Shaw Brothers, women play a more subservient role than in say The Dragon Missile (1976), also released by 88 Films in their Asia Collection. In that film, women are strong characters who can also fight. By contrast the Kang character belittles Pei Er for being a fighter. This blind spot for Kang leads to him losing his arm. His arm chopping is not the only metaphoric castration in the film. When two bandits kidnap and attempt to rape Pei Er, they too have their hands and arms cut off.

As with other films in 88 Films Asia Collection, the film is beautifully packaged with a reversible sleeve and a quality slip case with the image of the original Hong Kong poster adorning it. There is also a great contextualizing discussion on the film by David West, a thorough commentary track by Bey Logan while the film, presented in HD on Blu-ray is available with a dubbed English language version and Mandarin with English subtitles. Booklet sleevenotes are provided by Calum Waddell.