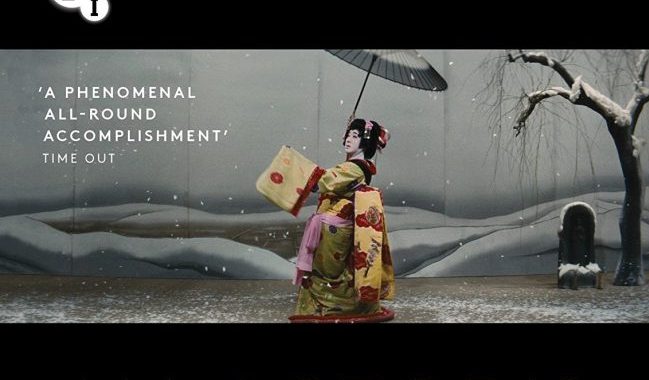 Kon Ichikawa was one of Japan’s leading film directors. He was a very prolific director, working with different styles and types of dramas, with arguably his two best known films being The Burmese Harp (1956) and Fires on the Plain (1959). Both of these were controversially set during the Second World War, a period that still held bitter and raw memories for the nation. His next best known film is An Actor’s Revenge (1963), a complex historical drama of revenge that is at the same time both simple and seemingly unnessarilly complex.

Presented in HD1080p with it’s original aspect ratio of 16:9 (2.35:1) letterbox format, showing off some wonderful framing of Ichikawa’s film. The widescreen works well with the opening scene, a kabuki theatre stage, decorated minimally with simply a blossom tree among a snowy scene (the widescreen perfectly mirroring the kabuki stage). Set in the 1830s Edo Period, the star of the stage, Yukitarō (Kazuo Hasegawa) is an onnagata, a male actor who plays female roles. Off stage Yukitarō remains in female kimono and white powdered make-up and wig. In the audience is Lord Dobe and two merchants from Yukitarō’s past. These three men were responsible for the early death and suicide of his parents. Yukitarō plots a long delayed revenge against these men. He clinically observes them and puts them into situations that will lead to their downfall and death. Yukinojō is observed and followed by a friendly master thief, Yamitarō (also played by Hasegawa in a dual role).

Ichikawa’s film is complex and a very artily shot revenge drama. The whole look of the film, not only resembles a Jacobean drama, but throughout appears to look like a play on the stage and for the most part it maintains this ambiguity. The period costumes and make-up are outstanding, the sets minimal and the camerawork and lighting highly chiarascuro as faces and people move into the light from the dark shadows. The colour too is very rich, making the most of its HD to a strong and powerful effect. Despite Yamitarō’s character being lighter, the film is not only very dark in its look, but in its mood with Hasegawa’s dual performance as the light, almost Puck like thief played off against his role role as the rather depressed actor.

Hasegawa was repeating his role(s) he played many years before in 1935, playing it 28 years later as a much older actor in what was his unbelievable 300th screen performance. He was a very presence in the film but never the less works well with its revenge tale, a samurai element and an interesting score that blends modern jazz with more traditional Japanese music.

Extras include a commentary track by Asian film expert, Tony Rayns. There are also several vintage newsreels of traditional Japan dating from the late 1920s and a documentary by the director of the controversial In the Realm of the Senses (1976) in a documentary from 1995 celebrating 100 years of Japanese cinema. While interersting, they have little to do with the main feature itself which, released on BFI is the first time it has been released in HD on Blu-ray.