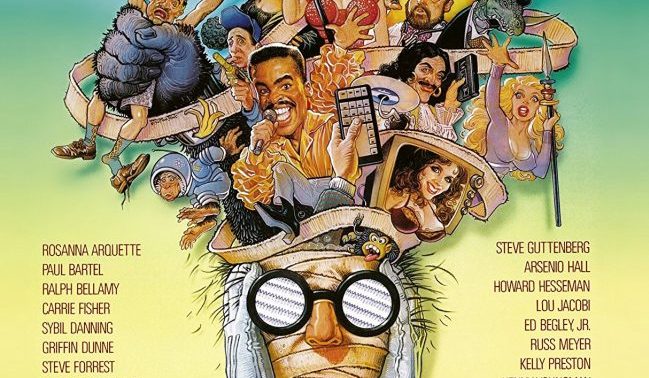 Released by 101 Films is an almost forgotten film from the 1980s, Amazon Women on the Moon (1987). It is an anthology piece with few connections, coherent ones at any rate. The men who brought the project together were both directors and producers on the film, Robert K. Weiss and John Landis. One of Landis’s first films was big cult hit and chaotic The Kentucky Fried Movie (1977). Landis was clear that this was intended on being a ‘Kentucky Fried Movie 2’. As Landis didn’t own the rights to the title he had to make-up a new one. Weiss, who was a producer and had produced The Kentucky Fried Movie, also made his directorial debut with this film was keen on directing what is probably best described as one of the few running seams through the film and formed the basis for the films title, Amazon Women on the Moon. Landis and Weiss also took on Carl Gottlieb, Joe Dante and Peter Horton to direct other skits and sketches.

The film is a series of short skits presented as stand alone short pieces, adverts, infomercials, comments on the video age and the media. Starring a whole bunch of famous actors and characters from US TV, there are just a couple of running gags that run through the film. One is an older man (Lou Jacobi, who always makes me laugh anyway thinking of his secret transvestite character in Woody Allen’s, Everything You Always Wanted to Know About Sex, 1973) sitting at home and in his underpants watching TV, happy at purchasing a TV remote control. Zapping changing channels he suddenely zaps himself inside the TV, instructing his wife to change the channel to take him back (until that is, he finds himself in the bedroom of Playboy model, Monique Gabrielle). Needless to say he keeps popping up throughout other skits.

The main repeating theme is the title skit or series of sketches, ‘Amazon Women on the Moon’. This is a parody on such 1950s sci-fi pulp films as Queen of Outer Space (1958) which starred Zsa Zsa Gabor or Fire Maidens From Outer Space (1954), while the costumes resemble those in Forbidden Planet (1955). It’s one of those films or sketches where the viewer will get the references even if they’re not familiar with the films with proper Amazonian actress Sybil Danning filling Gabor’s boots. It perfectly captures the cheapness and production values of the aforementioned films, even cinematographer Daniel Pearl has perfectly captured the quality of the colours of Gabor’s film. Pearl shot all 21 sketches for the 5 directors on the film.

Pearl also perfectly captured the look of the original The Invisible Man (1933) in a sketch entited, ‘Son of the Invisible Man’ directed by Gottlieb, in which the title character (Ed Begley Jr.) believes he is invisible and publically unwraps his bandages with hilarious results in arguably the best sketch in the film. The other effective sketch is the one with Steve Guttenberg and Rosanna Arquette in which Guttenberg turns up for a blind date and picks up Arquette before going into a restaurant. He finds her beautiful, but she insists on running checks on him with a print out showing all his usual lines, his sexual inadequacies and his dating pattern.

Of course on a film like this, like with the better known The Kentucky Fried Movie, the sketches and skits are hit and miss, more miss than hit and far from being a laugh a minute. It’s filled with familar names in short parts including Michelle Pfeiffer, Carrie Fisher (in a social diease parody of Reefer Madness, 1936), Arsenio Hall and Joe Pantoliano among many others. Extras on the disc also include the 6 sketches, not included on the final release, a blooper reel and interesting interviews with Gottlieb and cinematographer, Daniel Pearl as well as commentary track. 101 Films release an eclectric range of films and this is most definately an interesting addition.