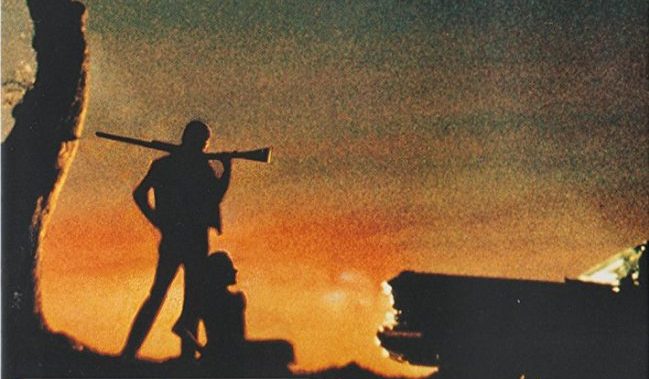 Back in 1980 BBC2 ran a series of films on Sunday nights called ‘The Great American Picture Show’, showcasing films made between 1969-1975. These films were the modern classics about life in America, particularly films set in such places as the Mid-West. The first film screened was Terence Malick’s first feature, Badlands (1973), undoubtedly one of the great American films of the 1970s. Unlike on British television in the 1980s, this film is now of course available in widescreen, taking full advantage of the great plains of the Dakotas (although much of it was shot in east Colorado). This was, if not the first, an early film for all the principles. Terence Malick had never been a prolific filmmaker, but this was his first feature. Martin Sheen, depite his youthful boyish looks was actually in his early 30s when he made the film and was moving into features after having appeared in many TV movies and of course had appeared in the hugely successful cult favourite Catch 22 (1970). Sissy Spacek, on the other hand, having made her debut in another Mid-West set thriller, Prime Cut in 1972 was playing in the early part of her career strangely innocent girls, culminating with Carrie (1976).

Badlands is set in the small South Dakota town of Fort Dupree in 1959. The film’s narrator is Holly (Spacek), a 15-year-old girl and only daughter to a single father (Warren Oates). We first see her in her front lawn busting out some majorette moves with a baton, highlighting the wide-eyed innocence of Holly. She is flattered when older boy Kit, who works the garbage trucks chat her up. An older boy (25), she is smitten by his James Dean looks (and boy does Sheen look like Dean here) but her father forbids her from seeing him. Kit tries to reason with her father and when this doesn’t work he breaks into their house to pack Holly’s things. When the father comes home and threatens to call the police, Kit shoots him dead and burns the house down with Kit and Holly driving off into the Great Plains of Dakota as fugitives. On the run, the body count for the film rises. What is particularly shocking is how Holly sees this as a big romantic adventure breaking her out of her bored life. They hide out in a treehouse in a wood until they are disturbed by the armed police after them. Meanwhile, Kit seems to think he has some kind of destiny, aware for good or bad he is making a name for himself.

From this first film, the reclusive Malick is able to show his credentials as a filmmaker of note, perfectly framing the picture and keeping the action moving. According to Sheen on a featurette on the disc, ‘Absence of Malick’, he knew from early on this film was going to become an American classic. The film is loosely based on the case of a Charles Starkweather but Malick did not want to be necessarily constrained by the facts of the case. Never the less the dynamic between Sheen and Spacek is an interesting one as she plays the strangely innocent ingénue under the spell of Sheen’s good looking, yet cold and calculating bad boy. The depiction of late 50s America is also well presented (as were many films shown on ‘The Great American Picture Show’ series) and is driven by its brilliant score that famously uses Carl Orff’s ‘Gassenhauer’, which was equally famously used as the theme in True Romance (1993). What is undoubted is what an enduring classic this film is and continues to be.